How Spying Shaped Modernity: A Review of 'Phantom Terror: Political Parandia And The Creation Of The Modern State, 1789-1848' 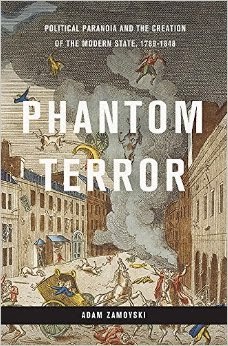 In the wake of the turbulent French Revolution at the turn of the 18th century, crowns rattled atop nervous royal heads throughout Europe. Was beheading monarchs going to become a new continental pastime? Would democratic forces sweep aside regimes whose only claim to “legitimacy” was heritage?

One can quibble with Adam Zamoyski’s use of the word “paranoia” in his subtitle, because the threats facing European royalty were well-founded, and could be ignored only at the rulers’ peril. And let us be realistic: the reflexive response of any established government that is under attack, political or otherwise, is self-preservation. So, at a remove of 200 years, one finds it difficult to quibble with the monarchs’ attempt at self-defense.

Which does not equate with defending their methods, to be sure. Mr. Zamoyski documents, in indisputable detail, a system that relied on bumblers and fumblers, “security agents” so inept as to make the Keystone Cops look like Sherlock Holmes in comparison. Further, the persons being oppressed often had legitimate economic and political grievances that their rulers would not address.

Perhaps the most repressive system, ironically, was in France, where the revolution had devolved into a de facto police state under Napoleon, with excesses exceeding even those of the deposed Bourbons. The responsible tyrant was police minister Joseph Fouche, who oversaw a surveillance system to insure that “people behaved themselves.” (Fouche insisted on “making vice contribute to the security of the state”; hence he heavily taxed gaming houses and brothels.)

But the spy system, under both Fouche and successors, was strikingly disorderly. Thieves, prostitutes, drug addicts — unreliable and unschooled, with scant political knowledge — were dispatched to ferret out subversion. These amateur sleuths crammed police files with thousands of “dossiers” — wearing the wrong color hat, for instance, could make a person a “subject of interest.” (The color might suggest “revolutionary tendencies,” you must understand.)