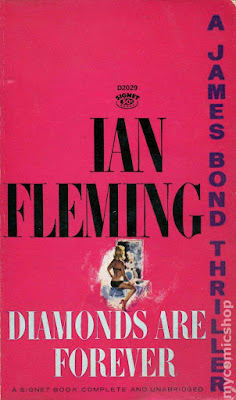 I'm a huge fan of Ian Fleming's thriller Diamonds Are Forever. I first read it as a teenager and I've reread the novel several times over the years.

I was disappointed in the 1971 film version of Diamonds Are Forever, even though the film makers reenlisted the great Sean Connery to portray Bond again. The film was a silly comedy and sadly did not use much from Fleming's novel.

So I was very interested in listening to BBC 4 Radio's faithful adaptation of Fleming's thriller.

Fleming's fourth Bond novel is especially dazzling. Its dark humour encompasses millions of pounds worth of diamonds smuggled out of British mines in Africa. Responsible? Somebody known as 'ABC'.

James Bond is sent undercover by MI6 to New York to follow the pipeline. Masquerading as a courier he meets enticing, ice-cold, Tiffany Case. She stands between Bond and gang-bosses whose criminal diamond business stretches from Sierra Leone, via London, to the gambling tables of Las Vegas.

You can link to the radio program via the below link:

And you can link to BBC 4 Radio via the below link:

After listening to the radio program, I suggest you read Ian Fleming's Diamonds Are Forever.
Posted by Paul Davis at 1:58 AM