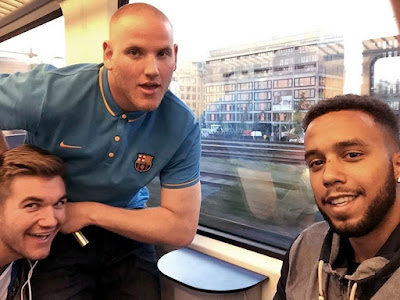 The DoD News released the below:

WASHINGTON, Aug. 22, 2015 — In a statement released today, Defense Secretary Ash Carter praised three Americans for their actions yesterday on a train outside of Brussels, Belgium.


"On behalf of all the men and women of the Department of Defense, I want to thank the brave individuals, including two members of the U.S. military, who stepped forward to prevent an even greater tragedy from taking place aboard that train," Carter said.

U.S. Air Force Airman 1st Class Spencer Stone, assigned to the 65th Air Base Group, Lajes Air Base, Azores; Oregon Army National Guard Spc. Alek Skarlatos and a civilian friend were traveling together via train on personal leave. The men took immediate action to subdue an armed gunman before he could engage his automatic weapon on the train.

"My thoughts and prayers today are with those injured in the attack, including Airman 1st Class Spencer Stone, whose selfless actions saved lives. I wish him a speedy recovery," the defense secretary said.

"Actions like this clearly illustrate the courage and commitment our young men and women have all the time, whether they are on duty or on leave," he said. "We are extremely proud of their efforts and now are praying for our injured airman to have a speedy recovery."

Stone, who suffered non-life threatening injuries in the attack, is currently being treated in a French medical facility.

"[Stone and Skarlatos] are two reasons why -- on duty and off -- ours is finest fighting force the world has ever known," Carter said.
Posted by Paul Davis at 11:19 PM