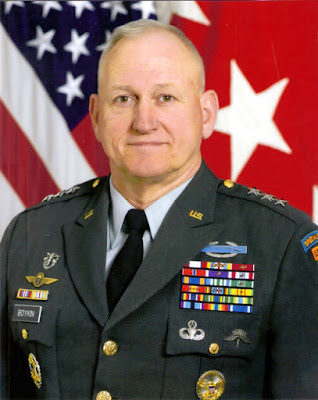 Carol Morello at the Washington Post offers a piece on the nearly 200 retired generals and admirals (which includes retired LTG William Boykin, who appears in the above photo) who have sent a letter to Congress urging the lawmakers to reject Obama's Iran deal.


A group of nearly 200 retired generals and admirals sent a letter to Congress on Wednesday urging lawmakers to reject the Iran nuclear agreement, which they say threatens national security.
The letter is the latest in a blizzard of missives petitioning Congress either to support or oppose the agreement with Iran, which would lift sanctions if Iran pared back its nuclear program. Letters have come from ad hoc groupings of rabbis, nuclear scientists, arms-control and nonproliferation experts — and now, retired senior military officers, many of whom have worked in the White House during various administrations dating to the 1980s.
The letter, addressed to Republican and Democratic leaders in the Senate and the House, is a response to one sent last week by three dozen retired senior military officers who support the nuclear deal.
“The agreement will enable Iran to become far more dangerous, render the Mideast still more unstable and introduce new threats to American interests as well as our allies,” the letter states.

You can also read my interview with retired LTG William Boykin, a former Delta Force Commander, via the below link: