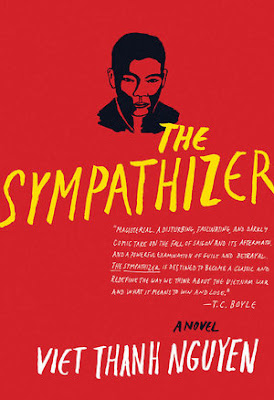 From Michael Herr's Dispatches to Denis Johnson's Tree of Smoke, from Oliver Stone's Platoon to Bruce Springsteen's "Born in the U.S.A.," the American experience in Vietnam has been closely examined and obsessed over, its human cost and toll on the national psyche put under the microscope in fiction, film, and song for decades.

It's not a conventional war novel. The Sympathizer opens with the fall of Saigon in 1975, with its title character - identified only as The Captain - helping his South Vietnamese superior The General escape, headed first to a refugee camp in Guam, and then to Los Angeles.

But The Captain is not the loyal aide-de-camp The General thinks he is. In fact, he's a North Vietnamese spy. He's a mole skilled at role-playing because - as the U.S.-educated bastard son of a Vietnamese mother and a French Catholic priest - his identity is fluid, his otherness a constant, whether meeting with Viet Cong contacts or working in the Department  of Oriental Studies at a California university.

Note: I read The Sympathizer. I don't subscribe to the narrator's communist, anti-American views, but I thought this was an interesting novel with a unique voice.
Posted by Paul Davis at 4:27 PM