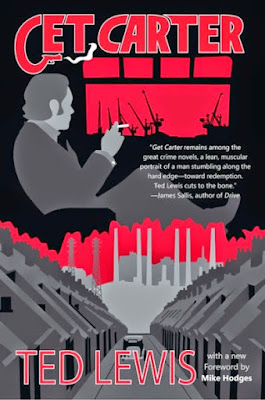 Kevin Canfield at the Daily Beast offers a piece on the revival of Ted Lewis' gangster character,


In the 1970s, an Englishman named Ted Lewis published three rowdy yarns about a brutal Briton working as an enforcer for a gangland “firm.” The first of these inspired a suitably gritty crime film recalled as one of the era’s best. The next two books weren’t so successful. But now, 32 years after Lewis’ death, his Jack Carter novels are getting a second life here in the States.
Fans of Get Carter, Mike Hodges’ 1971 movie, surely remember the exploits of the unflappable brute. As played by a young and rugged Michael Caine, Carter was a bitters-drinking, blade-wielding get-even artist who managed to make the act of eating soup on a moving train look menacing. Yet readers coming to the novels fresh won’t quite know what Lewis’ leading man is all about. So before we get to the enterprising small publisher responsible for reviving the books, and the brief but artistically fertile life of the man who penned them, let’s (re)acquaint ourselves with Carter’s CV.
It’s probably best to start with an explanation of how he became the top organized-crime fixer in the city he calls “the smoke” (i.e. London). As he puts in Jack Carter and the Mafia Pigeon, the series’ third novel, “it hasn’t exactly been unknown for me, as a matter of policy as far as the firm’s concerned, to see to transgressors from members of the opposition on a more or less permanent basis, the more or less depending on the degree to which your religious beliefs extends.” A history of violence and a gift for understatement—that’s Carter, a remorseless pulp fiction killer.
... On the whole, though, the novels are a welcome surprise to those of us whose only knowledge of Carter came via the big screen. The reissues are the first from Syndicate Books, an imprint that says it plans to put out up to 10 titles a year, mainly “out-of-print or neglected mystery and crime fiction of merit.” Syndicate was founded by Paul Oliver, the director of marketing and publicity for Soho Crime. In partnership with Penguin Random House, Soho will promote and sell the Carter books and future Syndicate titles. Until they were revived by Syndicate, the first two novels in the series were out of print in the U.S. for 40 years, and the third had never been published here at all.
You can read the rest of the piece via the below link: