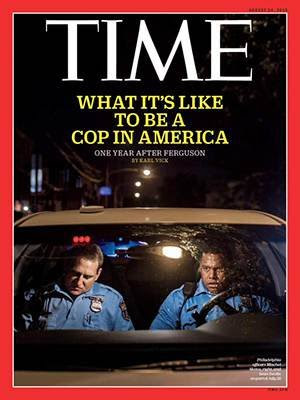 Karl Vick at TIME offers a piece on what Philly cops say about policing today.


The Philadelphia cops on the cover of this week’s TIME know as much as anyone about the topic looming in the type above them in their unmarked squad car: “What It’s Like To Be A Cop in America: One Year After Ferguson.”
The answer, in a word, would be: Harder.
“Absolutely,” says Sean Devlin, 35, the officer in the passenger seat, who has been patrolling in the 19th District of Philadelphia’s west side for the five and a half years he has been a cop. “I do know some officers who are turned off and just doing radio calls only. But it’s not in my nature. It’s my confidence in my ability and my partner, I can’t just fold up shop and sit back and let the community to be held hostage by the small percentage that’s the criminal element.”
His partner agrees. Mischel Matos, 38, who’s behind the wheel in photographer Natalie Keyssar’s cover image, says that a year ago, police did not face the scrutiny that accompanies every call for service—and not just the usual watchfulness cast in the direction of the uniform. People are recording every move you make, or at least every arrest.
“The difference comes up every time we encounter an investigation,” says Matos. “There’s always somebody through the window with a phone recording, expecting us to do something wrong.”

Labels: crime, Karl Vick, Mischel Matos, Philly cops on TIME's cover, police in Ferguson, Sean Devlin, TIME magazine, What it's like to be a cop in America