First Over There: The Attack On Cantigny: America's First Battle Of World War I 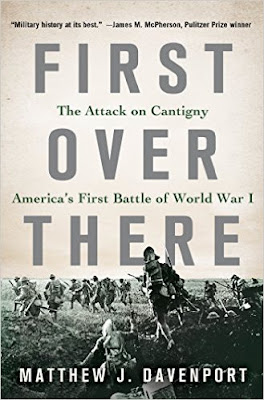 Veteran journalist and author Joseph C. Goulden offers a good review of Matthew J. Davenpost's First Over There for the Washington Times.


When a reluctant President Woodrow Wilson sent the first American soldiers into the European war in 1917, both he and U.S. commanders decreed that they must fight as independent units, and not be used as cannon-fodder replacements for battle-worn British and French troops.
Thus ensued a major battle of the war, one that put a decisive crimp in a German “final offensive” attempt to break a three-year stalemate of trench warfare by breaking through Allied lines. And the battle for positions around the obscure French village of Cantigny brought the first flickers of fame to a soldier who would lead the U.S. military during World War II.
George C. Marshall was a promising but relatively obscure lieutenant colonel in 1917. One handicap — and a large one in the army of the era — was that he was a graduate of Virginia Military Institute, not West Point. The close-knit fraternity of “ring-knockers,” as the West Pointers were known, frowned on outsiders.
But Marshall had caught the attention of Gen. John “Black Jack” Pershing, commander of the American Expeditionary Force. And of the four divisions making up the AEF, Pershing singled out the First Division to make the first American assault of the war.