Best Of Breslin: Meyer Lansky Didn't Know How To Behave 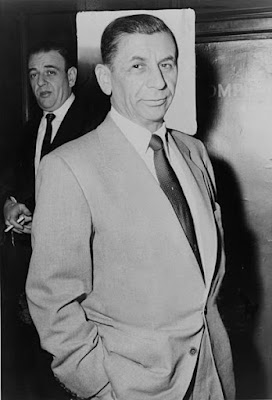 The Daily Beast is offering Jimmy Breslin's old columns on their website. I don't subscribe to Breslin's worldview, but I enjoyed reading his columns (as well as his comic crime novel The Gang That Couldn't Shoot Straight).


He was a man who loved Israel, but not enough to behave in it.
There was this time a few years back when Meyer Lansky, living in Florida, decided that a prosecutor’s questions could best be answered with movement, and Meyer left the United States, went to Israel, and asked for asylum. Which he received for a while, and Meyer could be found in the Dan Restaurant, Ben Yehuda Street, in Tel Aviv. He ordered the food for those who sat with him, and if somebody ever tried to order on his own, Meyer would frown. The waiter would inform the guest that the whole restaurant would be happier if people ate exactly what Meyer Lansky ordered.
Then the Israeli government announced one day that they were sending Lansky back to Florida, the rumor was that the United States was holding up an order of Phantom jets until Israel shipped Lansky back. But then one day I was at the bar of a place called Fink’s in Jerusalem and I asked the guy from the Israeli government about this and he said, “Please, we sent him away because he doesn’t believe in laws. He was causing trouble with taxicab fleets and nightclubs and women. Prostitutes. We don’t need him.”
You can read the rest of the column via the below link:
http://www.thedailybeast.com/articles/2015/08/15/best-of-breslin-meyer-lansky-didn-t-know-how-to-behave.html
Posted by Paul Davis at 9:54 AM