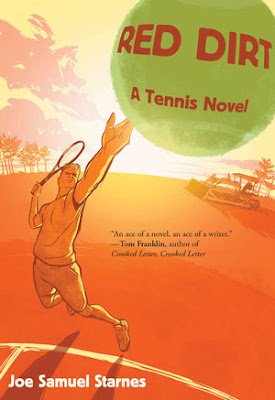 Jaxie Skinner is 3 when he sits with his family on the sofa in their house in Piney, Ga., and watches the first Björn Borg-John McEnroe final at Wimbledon in 1980. Afterward, his father goes outside and climbs onto his bulldozer:

"He made a long pass of about 120 feet and then turned and went back the other way, clearing another wide swath to reveal a large rectangle of virgin clay. The fresh earth shone, steaming in the hot sun. "Red dirt," he said. "Nothing like red dirt."

... It becomes the first clay court Jaxie will play on. A try at Wimbledon ends with a serious knee injury, and Jaxie spends 10 years as a drunken recluse in the house he grew up in. The harsh consequences of another of his ill-advised dalliances, though, gets him started on the comeback trail."

I don't know squat about tennis. I've never played it, and I don't think I've ever watched an entire match. So I was rather surprised to find myself engrossed in Joe Samuel Starnes' "tennis novel."

To begin with, Jaxie is a pretty honest narrator. When he describes himself toward the end as "a dude who has done the best I could and am trying to make right for the bad deeds I've done, to recover some of the talent I've wasted," he's actually not just blowing smoke.