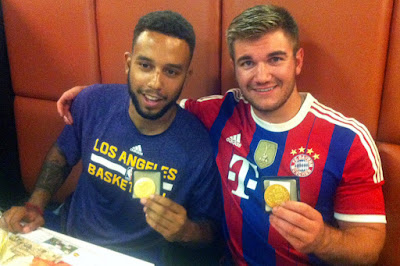 Jamie Schram at the New York Post reports on the American heroes (and a Brit) who tackled and disarmed a terrorist gunman on a French train.


Two off-duty members of the US military prevented a massacre Friday by overpowering a rifle-wielding madman after he opened fire aboard a high-speed train in France, wounding three people.
The gunman, identified by authorities as Moroccan national Sliman Hamzi, is a known Islamic militant, CNN reported, quoting a senior ­European anti-terrorism official.


he gunfire took place in the rear car of the Paris to Amsterdam express. Three people were shot, including one of the Americans, who was seriously wounded but expected to survive.
A friend of the heroes, Anthony Sadler, also was aboard the train and saw what happened. He identified them as Spencer Stone, of Sacramento, who was injured and Alek Skarlatos of Roseburg, Ore., who was unhurt.
You can read the rest of the piece and watch a video clip via the below link:
http://nypost.com/2015/08/21/suspect-in-custody-after-shooting-on-high-speed-train-in-france/
Posted by Paul Davis at 1:19 PM