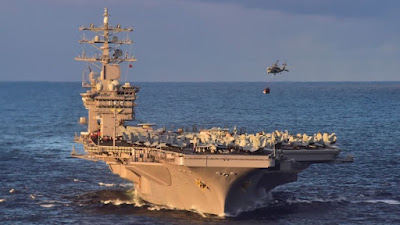 Peter Suciu at FoxNews.com offers a piece on the importance and the history of aircraft carriers.


Sophisticated anti-ship weapons and concerns about the U.S. Navy’s global ‘reach’ highlight the importance of America’s new state-of-the-art aircraft carriers, according to naval experts.
A recent report by Jerry Hendrix of the Center for a New American Security suggested that the aircraft carrier, the backbone of the U.S. Navy since World War II, might soon be threatened by a number of weapons including shore-based anti-ship systems. This report came out as the U.S. Navy revealed that it lacks the capability to provide a continuous aircraft carrier presence in both the Middle East and the Asia-Pacific until at least 2021.
In response to those revelations about carrier capabilities, which were made during a House Armed Services Committee hearing, Rep. Mike Conaway (R-TX) introduced legislation that would increase the number of operational carriers in the U.S. fleet mandated by law from 11 to 12. The Navy has two ships already in its pipeline for deployment.
Back in January 2007 it was decided that this new class would be named the Gerald R. Ford Class, and the first of these, the USS Gerald R. Ford (CVN-78) is currently scheduled to join the Navy's fleet next March. It will make its first deployment in 2019 and is meant to replace the USS Enterprise (CVN-65), which was taken out of active service in December 2012.
You can read the rest of the piece via the below link:

http://www.foxnews.com/tech/2015/12/15/americas-new-high-tech-aircraft-carriers-are-more-important-than-ever-experts-say.html
Posted by Paul Davis at 11:14 AM