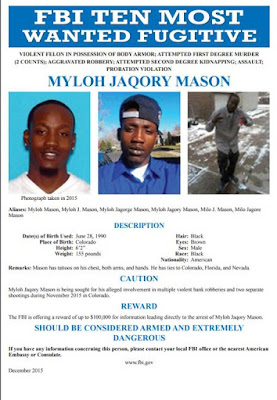 The FBI released the above wanted poster and below information:

The Federal Bureau of Investigation today announced the addition of Myloh Jaqory Mason, an alleged violent bank robber, to its Ten Most Wanted Fugitives list.

Mason is believed to have robbed at least two banks this fall. The first was in Lakewood, Colorado, on September 30, 2015. The FBI’s Rocky Mountain Safe Streets Task Force says Mason and two others wearing costumes and masks from the movie Scream allegedly shoved guns in the faces of bank tellers and told them they would die unless they opened the vault.

The most recent bank robbery happened on November 18, 2015, also in Lakewood, Colorado. Agents say Mason and two others wore bright green and white skeleton masks when they took over the bank, allegedly brutalized tellers and got into the vault. After fleeing the bank, Mason and his partners allegedly broke into a man’s house, pointed their weapons at him, and demanded he drive them somewhere in his minivan. Instead, the victim ran and the robbers allegedly shot him four times.

After the robbers crashed the minivan, they attempted to carjack a woman and allegedly shot her, too.

“Mason and his gang have committed some of the most violent bank robberies we’ve seen in Colorado,” said Thomas Ravenelle, special agent in charge of the FBI’s Denver Division. “We believe he’s not going to stop and is a real danger to the community. But he can’t run forever. We will get him off the streets with the assistance of the public.”

Both of Mason’s alleged partners, Tyrone Richardson and Miguel David Sanders, have been arrested.
“We appreciate the work of our FBI partners, and together we will locate and arrest this dangerous criminal,” said First Judicial District Attorney Pete Weir, “Mason presents a serious threat to our community. He is wanted in Jefferson County on 29 felony counts, including the attempted murder, kidnapping, and aggravated robbery of 10 innocent people during a violent crime spree in November.”

Mason was born on June 28, 1990. He is a black male, 6’2” tall, 155 pounds, with black hair and brown eyes. He has tattoos on his chest and both hands and arms. He is considered armed and dangerous.

“Mason is an extremely dangerous individual whose violent actions show that he is a threat to anyone who comes into contact with him. This includes family, friends, the public, and law enforcement officers. Getting him into custody is our highest priority,” Lakewood Police Chief Kevin Paletta said.
Mason is the 505th person to be placed on the FBI’s Ten Most Wanted Fugitives list, which was established in 1950. Since then, 473 fugitives have been apprehended or located, 156 of them as a result of citizen cooperation.

A reward of up to $100,000 is being offered for any information leading directly to his arrest. People with information about Mason should take no action themselves but instead immediately contact the nearest FBI office or local law enforcement agency. For any possible sighting outside the United States, contact the nearest U.S. Embassy or Consulate.

Please call in tips to 1-800-CALL FBI. Tips may also be submitted online at https://tips.fbi.gov.
Additional information regarding Mason, including his wanted poster, is available on the FBI’s Internet website at www.fbi.gov.
Posted by Paul Davis at 4:17 PM