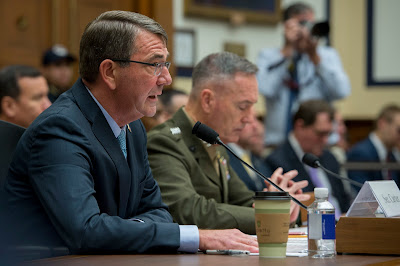 Cheryl Pellerin at the DoD News offers the below report.

WASHINGTON Dec. 1, 2015 — The Defense Department is quickly adapting to fighting the Islamic State of Iraq and the Levant and is urging the international community to step up the pace of its contributions to the fight, Defense Secretary Ash Carter said today.

The secretary, joined by Marine Corps Gen. Joseph F. Dunford Jr., chairman of the Joint Chiefs of Staff, testified before members of the House Armed Services Committee on U.S. strategy for Syria and Iraq.

“The president had directed us to intensify and adapt the military campaign before the [Nov. 13] Paris attacks,” Carter told the panel. “We continue to accelerate our efforts in the wake of Paris, and we are urging others to do the same, because those attacks further highlighted the stake that not just the United States, but the world, has in this fight.”

Tens of thousands of U.S. personnel are operating in the broader Middle East region, and more are on the way, the secretary said.

Some of the most advanced U.S. air and naval forces are attacking ISIL, he added, and U.S. troops advise and assist ground operations in Syria and Iraq.

“On President [Barack] Obama’s orders and the chairman’s and my advice, we’re sending special operations forces personnel to Syria to support the fight against ISIL,” Carter said.

In coordination with the Iraq government, the department is deploying a specialized expeditionary targeting force to help Iraqi and Kurdish peshmerga forces and to put more pressure on ISIL.
“These special operators will, over time, be able to conduct raids, free hostages, gather intelligence and capture ISIL leaders,” the secretary said. “That creates a virtuous cycle of better intelligence, which generates more targets, more raids and more momentum.”

Raids in Iraq will take place at the Iraqi government’s invitation and will focus on defending Iraq’s borders and building Iraqi security forces capacity, he added, and the special operators will be in a position to conduct unilateral operations into Syria.

“Over the past several weeks, because of improved intelligence and understanding of ISIL’s operations, we’ve intensified the air campaign against ISIL’s war-sustaining oil enterprise, a critical pillar of ISIL’s financial infrastructure,” he told the panel.

Raids using targeted airstrikes and the specialized expeditionary targeting force are helping to improve the ability to eliminate ISIL’s leadership, he said.

Because the threat posed by ISIL and similar groups spans regions and U.S. combatant commands, Carter said, the department is organizing a new way to leverage infrastructure already established in Afghanistan, the Levant, East Africa and Southern Europe into a unified capability to counter transnational and transregional threats.

“An example of this network in action was our recent strike on Abu Nabil, where assets from several locations converged to successfully kill this ISIL leader in Libya,” he said. “As that strike shows, there’s a lot of potential here, but to do more, we need to be creative and consider changes to how the Defense Department works and is structured.”

Carter said the department is constantly looking to do more in the fight against ISIL, but the world must do the same.

“The international community, including our allies and partners, has to step up before another attack like Paris,” the secretary said. France has been galvanized by the attacks in its capital, Britain is debating expanded airstrikes, Italy has made important contributions in Iraq, and Germany is making more contributions, he noted. . All countries, including the United States, must do more, he added.
Turkey must do more to control its border, and Saudi Arabia and the Gulf States have been preoccupied by the Yemen conflict after joining the air campaign in the early days, Carter said. Russia, which publicly committed to defeating ISIL, has largely attacked opposition forces rather than ISIL, the secretary told the House committee.

“It is time for Russia to focus on the right side of this fight,” he said.

American leadership is essential, he added, but contributions from other nations will boost the combat power the department can achieve using its own force.


“We also need to leverage our allies’ and partners’ relationships and capabilities to effectively work with Syrians and Iraqis, who in the end must expel ISIL and restore effective governance," the secretary said.

Note: In the above DoD photo Defense Secretary Ash Carter, foreground, and Marine Corps Gen. Joseph F. Dunford Jr., chairman of the Joint Chiefs of Staff, testify before the House Armed Services Committee about U.S. strategy for Syria and Iraq in Washington, D.C. on Dec. 1, 2015. The photo was taken by Air Force Senior Master Sgt. Adrian Cadiz.
Posted by Paul Davis at 3:50 PM