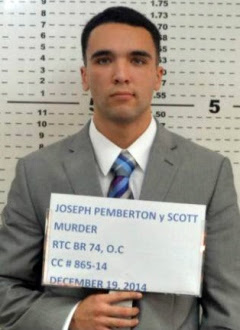 Seth Robson at Stars and Stripes reports on the conviction of a U.S. Marine in the Philippines.


OLONGAPO CITY, Philippines — A U.S. Marine was convicted of homicide Tuesday for the slaying of a transgender woman whom he picked up while on shore leave.
Pfc. Joseph Scott Pemberton was sentenced to six to 12 years in a Philippine prison and ordered to pay 4,655,250 pesos (about $100,000) in damages to the family of Jeffrey “Jennifer” Laude, 26.
Pemberton had been charged with murder but was convicted of the lesser charge due to mitigating circumstances, including lack of premeditation and that he was intoxicated at the time.
You can read the rest of the piece via the below link:

http://www.stripes.com/news/pacific/marine-convicted-in-transgender-slaying-during-shore-leave-in-philippines-1.381316
Posted by Paul Davis at 9:16 AM