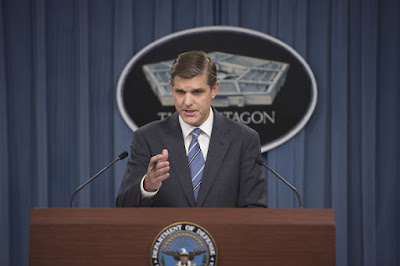 Two other al Shabaab-affiliated associates also were killed in the strike that specifically targeted Abdirahman Sandhere, he said.
“Ukash's removal from the battlefield is a significant blow to al-Shabaab,” Cook said, “And [it] reflects the painstaking work by our intelligence, military and law enforcement professionals.”
The death of Abdirahman Sandhere is an important step forward in the fight against the al-Shabaab organization, Cook emphasized.
“The United States will continue to use the tools at [its] disposal -- financial, diplomatic, intelligence and military -- to dismantle al Shabaab and other terrorist groups who threaten United States, [its] interests and persons,” he said.
Cook said the United States will continue to support its international partners, particularly the African Union Mission in Somalia, which is working to support the government of the Federal Republic of Somalia to build a secure and stable future for the Somali people.
U.S. Strikes Did Not Hit Syrian Army
This morning, Pentagon Press Operations Director Navy Capt. Jeff Davis told reporters the airstrikes this weekend in Syria’s Darazor province that hit a Syrian army position did not result from U.S. operations.
“We did conduct four strikes in Darazor yesterday,” he said, and added the U.S. strikes were all against oil-well heads. These strikes, Davis added, were about 55 kilometers away from the strike where the Syrian army was reported to be.
The U.S. airstrikes did not hit vehicles nor personnel, Davis said.
“We have no reason to indicate any Syrian soldiers were anywhere near the area where we struck,” Davis emphasized.
“We maintain exacting procedures and strict protocols to be precise in our strikes, and we take significant steps during targeting processes to prevent collateral damage,” he said.

“As you know, we’ve not had any reason to target [Syrian President Bashar Assad’s] regime or the Syrian army, Davis said. “We’re at war only with ISIL.”
Posted by Paul Davis at 10:13 PM