Many U.S. Troops Serving Overseas During The Holidays 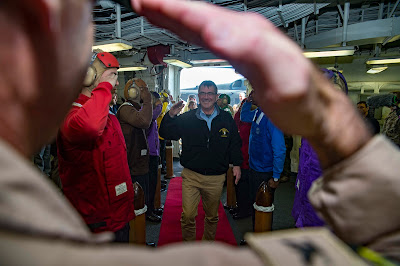 As a teenage sailor in 1970 I spent Christmas aboard the USS Kitty Hawk as the aircraft carrier performed combat operations off the coast of Vietnam.

So the below piece by the DoD News' Jim Garamone interested me. My heart goes out to the servicemen and women who are separated from their families during the holidays.

WASHINGTON Dec. 22, 2015 — Thousands of U.S. service members and Defense Department civilians are serving around the world during the holidays to protect America, its interests and its allies.

All told, there will be roughly 220,000 American service members serving overseas this holiday season. They operate in more than 100 countries, on every continent.

"I want you to know that you are what I wake up to every morning," Defense Secretary Ash Carter told troops Dec. 19 aboard the USS Kearsarge. "You're what I think about all day. I'm so proud of you and 100 percent, 1,000 percent behind you."

Snapshot of Troops Around the World

The U.S. Navy has 36 ships deployed around the world. The largest is the aircraft carrier USS Harry S. Truman, which has transited the Suez Canal and is headed for operations in the Arabian Gulf. There are more than 5,000 personnel aboard the ship. The Truman will be accompanied by destroyers, each with about 300 crew members. Submarines and resupply ships are also usually part of the equation.

The amphibious ready group centered around the USS Kearsarge is operating in the Arabian Gulf. There are 5,000 sailors and Marines aboard.

Navy ballistic missile submarines operate 24/7 around the world. The submarines are part of America’s nuclear triad, and there are around 150 crew members.

In the Pacific, there are roughly 50,000 American service members based in Japan. Another 28,500 troops are based on the Korean Peninsula.

About 500 service members will be celebrating the holiday season in Australia and more celebrating in Singapore.

More than 64,000 U.S. service members are stationed across Europe -- from Rota, Spain, to the Baltic Republics. The highest number is in Germany, followed by Italy, the United Kingdom and Spain. There are another 3,000 based in Turkey, which is a NATO ally with most of its territory in Asia.
In Central and South America, there are roughly 5,500 service members deployed. U.S. airmen may also be operating to resupply scientists in Antarctica during the holidays.

But it is not just overseas that U.S. service members are serving. Some Air Force missileers man the ICBM silos across the American heartland, while other airmen vigilantly defend the space, airspace and cyberspace. Coast Guardsmen must stay ready for incidents at sea.

And while many bases try to limit operations during the holidays, units still have to have on-call duty members prepared to be called to work at a moment's notice. Military police still have to guard the gates, and thousands of military and civilian specialists still have to care for those in hospitals.

America's military members are away from their families "doing the noblest thing you can you can possibly do with your life, which is protect our people and make a better world for our children," Carter said.

Note: In the above U.S. Navy photo taken by Petty Officer 3rd Class Tyler Preston U.S. Defense Secretary Ash Carter arrives aboard the amphibious assault ship USS Kearsarge in the Arabian Gulf on Dec. 19, 2015. The Kearsarge is the flagship for the Kearsarge Amphibious Ready Group and, with the embarked 26th Marine Expeditionary Unit, is deployed in support of maritime security operations and theater security cooperation efforts in the U.S. 5th Fleet area of operations.
Posted by Paul Davis at 10:45 PM