The Triumph Of William McKinley: Why The Election Of 1896 Still Matters 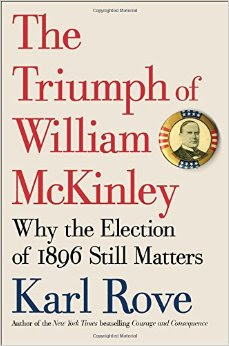 Veteran journalist and author Joseph C. Goulden offers a good review in the Washington Times of Karl Rove's The Triumph of William McKinley: Why the Election of 1896 Still Matters.


At hand is a three-fer of a book: an account of the silver versus gold turmoil that gripped the United States near the turn of the 20th century; an incisive look at what veteran political strategist Karl Rovecalls “the first modern presidential primary campaign,” and astute advice on how the modernRepublican Party could benefit from the examples set by the 1896 William McKinley campaign.
Mr. Rove is perhaps the most skilled political strategist of his generation. As a Texas-based consultant, he ran more campaigns for more than 75 Republican congressional and gubernatorial candidates in 24 states, climaxing with two wins for President George W. Bush. Renowned during his Washington days as a bookworm, in the best sense, Mr. Rove puts his accumulated knowledge of history to use to craft a superb political read.
You can read the rest of the review via the below link:
http://www.washingtontimes.com/news/2015/dec/27/book-review-triumph-william-mckinley/
Posted by Paul Davis at 2:32 AM