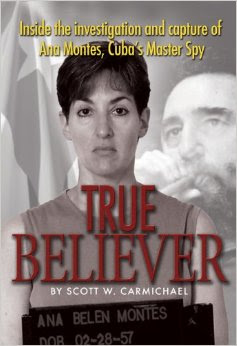 Congresswoman Ros-Lehtinen offers a piece in The Hill on Ana Belen Montes, a Defense Intelligence Agency employee who spied for Castro's Cuba.

In the 12 months since President Obama publicly announced his normalization effort with the communist Castro regime, the White House should have learned two painful lessons. First, the Castro brothers have not and will not change their oppressive ways. Second, the regime’s role as “intelligence trafficker to the world” ensures it will continue seeking opportunities to undermine U.S. national security.

The Cuban military and intelligence service will use this rapprochement as a pretext to expand Cuba’s espionage efforts within our borders.
One year ago, as a concession to the Castro regime, Obama made the grave mistake of releasing the last three of five incarcerated Cuban spies known as the “Cuban Five.” These five Cuban intelligence agents were arrested by federal authorities in 1998 and subsequently convicted on several counts, including failing to register as a foreign agents, using false identities, and conspiracy to commit espionage. The network’s leader, Gerardo Hernandez, was also convicted of conspiracy to commit murder for his involvement in the shoot down of two U.S. search and rescue aircraft operated by Brothers to the Rescue, which led to the murder of three U.S. citizens and one U.S. legal permanent resident.
Cuban Military Intelligence officer Hernandez, head of the espionage ring known as the Wasp Network, was convicted in 2001. Soon thereafter, the Cubans aggressively aided the San Francisco-based National Committee to Free the Cuban Five.
Now, the Cuban regime and their sympathizers are taking similar actions on behalf of Ana Belen Montes. Press reports suggest Washington and Havana are thinking about another spy trade, but this time for Montes, the highest-ranking American ever convicted of spying for Fidel Castro in our history.
You can read the rest of the piece via the below link:

You can also read my Philadelphia Inquirer review of Scott W. Carmichael's book on Montes via the below link:

http://www.pauldavisoncrime.com/2013/08/my-philadelphia-review-of-scott-w.html
Posted by Paul Davis at 8:47 AM