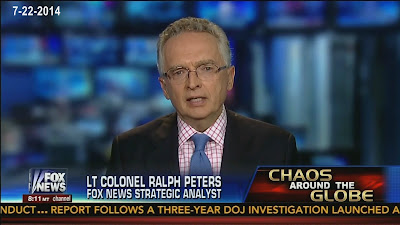 This is the view of most of the current and former military people I've talked to over the years of the Obama administration.

David Rutz at freebeacon.com offers a piece on the broadcast.


Retired U.S. Army Lt. Col. Ralph Peters called President Obama “a total pussy” during a live interview Monday for what he views as his impotent response to the threat of Islamic extremist terrorism.
Peters, a Fox News military analyst, appeared on Stuart Varney’s Fox Business program to respond to Obama’s Sunday night Oval Office address on the threat of terrorism, a speech that was widely panned. Peters, a fierce critic of Obama’s national security policies, was visibly angry as he blasted the speech.
You can read the rest of the piece via the below link: