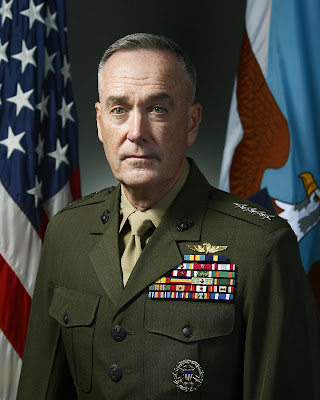 Jim Garamone a the DoD News offers the below piece:

WASHINGTON, Dec. 14, 2015 — The chairman of the Joint Chiefs of Staff discussed his short-term priority – defeating the Islamic State of Iraq and the Levant – and provided insight into his long-term goals during a talk at the Center for a New American Security here today.

Marine Corps Gen. Joseph F. Dunford Jr. spoke about the security environment and its implications on the force of the future and also spoke about joint force organization.

Current trends indicate any conflict in the future will be transregional, multidomain and multifunctional, the chairman said.

“When I look at information operations, cyber capabilities, space and counter-space capabilities, ballistic missile technology – they have all affected the character of the modern battlefield,” the general said. “And we see such capabilities fielded by both state and nonstate actors.”

An example of the changes these technologies have wrought is North Korea, Dunford said, noting that in the past, military planners believed any conflict would be confined to the Korean Peninsula. “But as North Korea developed ballistic missile technology, that obviously affected other regional actors, such as Japan,” he said.

Today, with ICBMs, cyber, information operations and more, “it’s pretty hard to see how even a conflict on the peninsula would be anything but transregional, multidomain and multifunctional,” the chairman said.

Current planning, organizational constructs and command and control set-ups “is not optimized for that fight,” he added.

U.S. military planning is done regionally and commanders rely on cooperation and collaboration, the chairman said. “It may surprise you to know this, but the lowest level of integration in the Department of Defense really is the secretary of defense,” he said. “That’s an issue that’s on the top of my inbox. That’s an issue that I am taking a look at hard.”

Underlying everything are the people of the U.S. military, the chairman said, noting that he returned from a trip last week in which he visited with service members in U.S. European Command, U.S. Africa Command and U.S. Central Command. “I saw a large number of soldiers, sailors, airmen and Marines, and they are in great spirits. … The closer I got to the fight, the more spirited they were. They are focused and proud about what they are doing,” he said. “I don’t take that for granted. The one thing I am mindful of as I come into the job is that we have been running pretty hard for a long period of time.”

The challenges of the world mean they won’t get a rest soon, Dunford said.

“I told them I can’t see a time where that dynamic is going to change,” he explained. “If our requirements continue to be what I believe they will be, and the force structure stays about what it is today, … we are going to be running hard for some time to come.”

The general said he is looking at new ways to measure joint readiness, and that people should expect a new way of looking at the concept after the first of the year.

“It isn’t just the readiness of our individual units and the parts and pieces,” he said. “It’s making sure we have the right inventory, and also making sure on a day-to-day basis we are postured to respond in a timely manner.”

The fight against violent extremism is a transregional conflict, the chairman said. Still, he added, the Defense Department’s portion of the nine lines of effort are focused on destroying core ISIL in Syria and Iraq, and the U.S. military does this by striking ISIL leaders and fighters. “The second critical element is to develop and support effective partners on the ground to seize and secure ISIL-held terrain,” he said.

Dunford came to the venue straight from a meeting with President Barack Obama and the rest of the National Security Council at the Pentagon. “I want to make it clear that within the framework of international and domestic law, our policies and our end state, I don’t personally feel at all inhibited in terms of making recommendations to the president,” he said. “And we will continue to do that.”
Syria, he said, is the bigger challenge, because there is no partner on the ground. The Iraqi security forces and Kurdish peshmerga provide allies to take and control terrain inside Iraq. Dunford did say he understands how much more needs to be done, but that he is encouraged by operations against ISIL.

However, the chairman said, the threat from extremists, while pressing, is not the only security challenge. The capabilities and behaviors of four state actors– Russia, China, Iran and North Korea – must inform U.S. contingency plans, he said.

“Despite its declining population and shrinking economy, Russia has made a significant investment in its military capabilities,” the chairman said. Russia has fielded new ICBMs, aircraft, new submarines, tanks and air defense systems. The nation is also expanding capabilities in space and cyberspace. As you look at Russian capability, you have to look at it in the context of what they have done in Crimea, Ukraine and Syria.”

Dunford then turned to China, saying the emphasis is to cooperate with the rising giant. “We also – and we get paid to do that – watch closely the developments in their military capabilities and their behavior in the South China Sea,” he said.

Iran and North Korea are exporters of instability who continue to look for new ways to threaten neighbors, the chairman said.

All of these challenges have implications for the future joint force, he said, and the first is foundational.

“We need a balanced inventory of joint capabilities that’s going to allow us to deter and defeat potential adversaries across the range of military operations,” he said. “We don’t have the luxury to have a choice between a force that can fight the current fight against violent extremism and one that can deal with the full range of challenges.”

The second implication is to define how to use the military instrument of power in the “gray zone” of cyberspace, he said.

“I believe we need to develop more effective methods to deal with challenges like Russia’s ‘little green men’ or Iranian malign influence,” he said. “Our traditional approach – where we view things either as at peace or at war – may not be the case for our adversaries.”