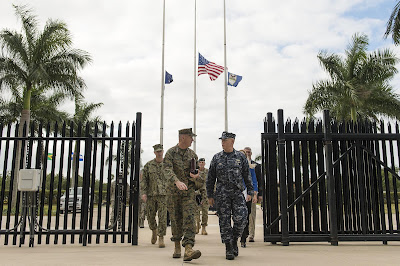 The Southcom commander, testifying before the Senate Armed Services Committee for the first time since taking command in January, also discussed how the fiscal year 2017 DoD budget request affects Southcom.

“No two networks are alike,” Tidd said. Some are international criminal enterprises focused on transporting any illicit cargo for the right price, he said, while others are small operations that smuggle desperate migrants.

Other networks support terrorist organizations through financing and the spread of violent extremist ideology, he told the panel.

“They operate deliberately in the Western Hemisphere as part of their broader global strategies. The most concerning of them is Russia, which portrays the United States in our theater as unreliable and as withdrawing from this pivotal region,” Tidd said.

Security in the Western Hemisphere connects directly to other parts of the world, the admiral said.
“Smuggling networks run through South America directly into our homeland [and] foreign terrorist fighters flow from the Caribbean to Syria and to Iraq,” Tidd added.

As part of its global strategy, he said, Russia tries to discredit U.S. reliability as a trustworthy partner in the United States’ own region.

Also in Southcom’s area of responsibility is Colombia, Tidd said, a country where the United States has worked for decades to help countering narcotrafficking and the Fuerzas Armadas Revolucionarios de Colombia, or Revolutionary Armed Forces of Colombia, called the FARC.

Yet, hard work remains to done in Colombia, the admiral said, including extending government influence into dangerous criminal-controlled territory, confronting the persistent threat of cocaine production and trafficking, and securing peace after more than 50 years of conflict.

“With the blood and treasure that they have already sacrificed,” Tidd said, “with all that they continue to do to export security across the region, the Colombian people have more than earned our sustained support.”

“Our Central American partners are doing all they can to win their countries back from vicious gangs and narco traffickers, but they cannot do it alone. And because we remain the No. 1 world's consumer of illicit drugs, we owe it to them to do our part,” Tidd said.

Guantanamo Bay, Cuba, also in Southcom’s area of responsibility, the admiral said, “is where we conduct the most principled, humane detention operations anywhere in the world, and we will continue to do so until the very last detainee steps on an airplane and departs the island.”

In response to a question about whether the fiscal year 2017 DoD budget request has adequate resources for Southcom, Tidd said it does not.

Southcom’s U.S. partners in the region, including the Navy in the Caribbean and the Pacific, who coordinate with the law enforcement arm of the Coast Guard, need resources too, Tidd said.

“It is very much a team sport. The activities orchestrated by our Joint Interagency Task Force South in Key West, Florida, involve the efforts of all of the federal law enforcement agencies, [and] the Coast Guard, plays a very significant role,” the admiral said.

In the Southcom region, he added, the adversary is flexible and agile.

“It's like squeezing a balloon,” Tidd said. “When we squeeze in one place if we are not able to apply pressure across the entire breadth of the network they will adapt and move to the area that they think they can get into.”

On the regional outbreak of Zika virus that began in Brazil, Tidd described Southcom’s role in such epidemics.

In May, the Pan American Health Organization issued an alert about the first confirmed Zika virus infection in Brazil. That outbreak, according to the U.S. Centers for Disease Control and Prevention, led to reports of Guillain-Barre syndrome and women giving birth to babies with microcephaly and other birth defects and having “poor pregnancy outcomes.”

During the 2014-2015 Ebola outbreak, Tidd said that a large interagency network was formed and Southcom was a key participant, and the group was re-energized with the Zika outbreak.

“We remain postured to respond to requests for assistance from our partner nations in Southcom. We have put out specific guidance to the men and women who are part of our command operating in that region,” the admiral told the panel.

Protective measures that impact service members, he added, are the same measures that have been in place to protect them from exposure to dengue fever, chikungunya and other mosquito-borne illnesses.

To date, the only two male service members who have been diagnosed with Zika have recovered and returned to duty,” Tidd said.

“We're working with the countries, primarily on training in the mosquito eradication programs,” he said. “Their militaries are very heavily engaged in those activities, so that's where we stand, right now.”


The admiral said that the U.S. Naval Medical Research Unit No. 6 in Peru, part of the Armed Forces Health Surveillance Branch, has been doing work in the development of experimental vaccines and disease-detection methods related to mosquito-borne diseases like Zika.
Posted by Paul Davis at 10:46 PM