Why Scientists Disagree About Global Warming: The NIPCC Report On Scientific Consenus 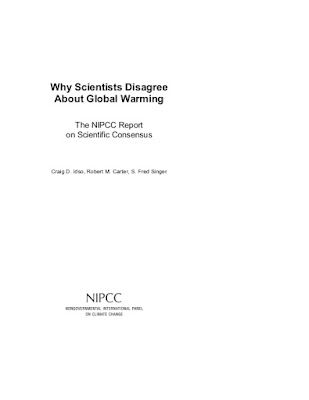 
The understanding of human impact on long-term global climate change is not settled science.
“Why Scientists Disagree About Global Warming: The NIPCC Report on Scientific Consensus” by three distinguished scientists, Craig D. Idso, Robert M. Carter and S. Fred Singer, challenges the popular notion that science has concluded that humans are causing catastrophic climate change. The three authors are contributors to the NIPCC (Nongovernmental International Panel on Climate Change), a group of “nongovernmental scientists and scholars who have come together to understand the causes and consequences of climate change.”
Besides being a synopsis of a much larger work — a chapter in a forthcoming volume titled “Climate Change Reconsidered II: Benefits and Costs of Fossil Fuels” — the book is a rejoinder to the sound-bite science that is so popular today. “Why Scientists Disagree About Global Warming” chews up these sound bites, such as: “97 percent of scientists agree” with the conclusion that humans are causing catastrophic climate change; or, skeptics of the “consensus view” are paid off by big fossil fuel industries.
... “Why Scientists Disagree About Global Warming” is a virtual handbook of well-documented arguments and cogent perspective that counter nearly every assertion given to “prove” that human beings are responsible for climate disaster.
You can read the rest of the review via the below link: