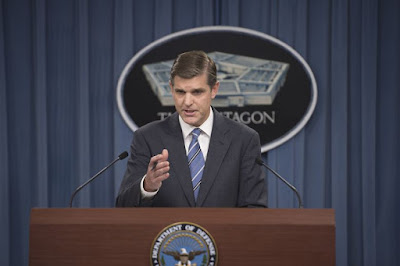 Karen Parrish at the DoD News offers the below report:

Cook said the strikes were based, in part, on information provided by an ISIL captive.

His capture removed a key ISIL leader from the battlefield and provided the coalition with important information about ISIL's chemical weapons facilities, production, and the people involved, the press secretary noted. Dawud was transferred earlier today into the custody of Iraq’s government, Cook added.

“We’re confident that the strikes that have been conducted have disrupted and degraded [ISIL’s] chemical weapons capabilities,” he said.

Chemical Strikes ‘Another Component’ of Campaign

While the chemical program may not have been “knocked out in full,” Cook said, “we feel confident that we’ve made a difference … and this information was very helpful in conducting these strikes.”
The information collected “will continue to inform our operations in the future,” the press secretary added.

“We feel good about what’s been accomplished here,” Cook said. “And … we’re not done.”
ISIL has shown its willingness to use chemical weapons, the press secretary said.


“We’ve seen their use demonstrated in Syria and Iraq,” he said, “and we’re going to continue to do everything we can, working with our coalition partners, and of course the Iraqi government as well, to try and address the use of these agents.”
Posted by Paul Davis at 5:11 PM