In a previous post I commented on the many viewers who thought actor Aidan Turner was a standout among a distinguished and talented older cast in the TV series And Then There Were None, and that he should be considered as the next actor to portray Ian Fleming's iconic character James Bond - http://www.pauldavisoncrime.com/2016/03/the-new-james-bond-aidan-turner-steals.html

Having watched the conclusion of the TV series based on Agatha Christie's mystery novel, I feel even more strongly that Turner should be cast as Bond, and I'd like to also suggest to the Bond film producers, Barbara Broccoli and Michael Wilson, that they should also consider casting another actor from the cast of And Then There Were None.

Charles Dance, the actor perhaps best known as Tywin Lannister from The Game of Thrones, was excellent as a former judge in the mystery movie and he would be superb as a brilliant and sinister Bond villain.

Dance, seen in the above photo from And Then There Were None, portrayed a minor villain in the Roger Moore-Bond film For Your Eyes Only and he also portrayed Ian Fleming some years ago in the TV film Goldeneye: The Life of Ian Fleming.

He's a fine actor and he would be perfect as a Bond villain up against Aidan Turner (seen in the below photo) as James Bond. 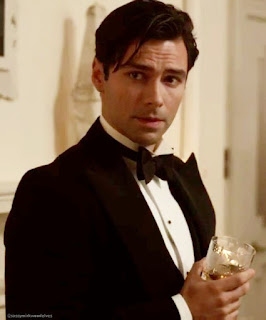 And while we're mining the cast, may I also suggest that actor Sam Neill (seen in the bottom photo from And Then There Were None), who was great in Reilly: Ace of Spies, and once auditioned for the role of James Bond, would now be perfect in the role of Bond's boss, M.