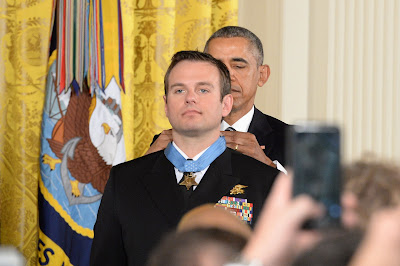 Terri Moon Cronk at DoD News offers the below piece:


Byers, a Toledo, Ohio, native and also a Navy corpsman, became the 11th living service member awarded the Medal of Honor for heroic actions in Afghanistan. He has deployed overseas 11 times, has had nine combat tours, and is two-time recipient of the Purple Heart and a five-time recipient of the Bronze Star with valor, among his many awards.
Hostage in Taliban Hands
The president said the American doctor, who was bringing health care to the Afghan people, was captured and held by Taliban forces in a small, single-room building in a remote valley of a mountainous region.
The doctor lost all hope, Obama said, quoting him as saying, “I was certain, I was about to die.”  His captors told him the Americans were not coming for him. “Well, they were wrong,” Obama said. “Whenever Americans are taken hostage in the world, we move heaven and earth to bring them home safe. We send some thunder and some lightning -- our special operator forces -- folks like Ed Byers.”
When the United States believed a Taliban commander was about to move the hostage to Pakistan, time was of the essence, Obama said. From a remote forward-operating base, Byers and his joint team geared up, boarded their helicopters and launched, he added.
‘Bullets Started Flying’
“Once on the ground, they moved -- under the cover of darkness, on that cold December night -- through the mountains, down rocky trails for hours,” the president said. “They found their target and moved in, quickly and quietly. When they were less than 100 feet from the building, a guard came out and bullets started flying.
“Our SEALs rushed to the doorway, which was covered by a layer of blankets,” Obama continued. “Ed started ripping them down, exposing himself to enemy fire. A teammate, the lead assaulter, pushed in and was hit. Fully aware of the danger, Ed moved in next. An enemy guard aimed his rifle right at him. Ed fired. Someone moved across the floor -- perhaps the hostage, [or] perhaps another guard lunging for a weapon.”
The ensuing struggle was hand-to-hand, and Byers straddled the man, pinning him down, Obama said. Byers adjusted his night-vision goggles, and after gaining better focus, he realized he was on top of a guard.
Obama said the American hostage later described the scene as a dark room suddenly filled with men and the sound of exploding gunfire. Narrow beams of light shot in every direction, and voices called out his name. He answered, “I’m right here.”
Byers Covered Hostage
“Ed leapt across the room and threw himself on the hostage, using his own body to shield him from the bullets,” Obama said. “Another enemy fighter appeared, and with his body, Ed kept shielding the hostage. With his bare hands, Ed pinned the fighter to the wall and held him until his teammates took action. It was over almost as soon as it began.”
In just minutes, by going after the guards, Byers saved the lives of his teammates and the hostage, Obama said. “You’re safe,” Obama said the SEALs told the doctor. “You are with American forces.”
But the success came with a price, the president said. The first SEAL through the door, Byers’ friend Navy Chief Petty Officer Nicolas Checque, was badly wounded and later died. On the helicopter out, Byers stayed with him, performing CPR during the 40-minute flight, the president said. “Today, we salute Chief Petty Officer Nicolas Checque,” Obama said, noting that Checque was one of 70 Naval Special Warfare members -- 55 of them SEALs -- who have made the ultimate sacrifice since 9/11.
“Small in number, they have borne an extraordinarily heavy load,” the president said. But they continue to volunteer, mission after mission, year after year. I see the difference you make every day -- the partners you train, the relationships you forge, the other hostages that you’ve brought home, the terrorists that you take out. I’ve waited, like many of you, in those minutes that seem like hours when the margin between success and failure is razor-thin, for word that the team is out safe. I’ve grieved with you and I’ve stood with you at Dover [Air Force Base in Delaware] to welcome our fallen heroes on their final journey home.”
The U.S. special operations forces are a strategic national asset, teaching the nation that humans are more important than hardware. “Today is a reminder that our nation has to keep investing in this irreplaceable asset, which means deploying our special operators wisely, preserving force and family, making sure these incredible Americans stay strong in body, in mind and in spirit,” Obama said.
Byers Citation: ‘Bold, Decisive Action’
A military aide read Byer’s citation and noted his “conspicuous gallantry and intrepidity at the risk of his life above and beyond the call of duty.”
“His bold and decisive actions under fire saved the lives of the hostage and several of his teammates,” the citation says. “By his undaunted courage, intrepid fighting spirit and unwavering devotion to duty in the face of near-certain death, Senior Chief Petty Officer Byers reflected great credit upon himself and upheld the highest traditions of the United States Naval Service.”
Posted by Paul Davis at 12:06 AM