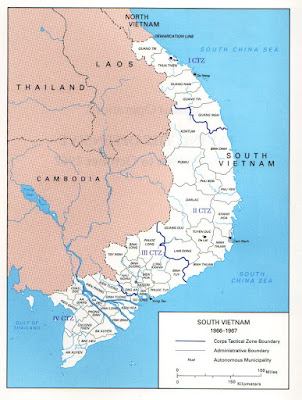 As History.com notes, on this day in 1973 all American combat troops withdrew from South Vietnam.

Two months after the signing of the Vietnam peace agreement, the last U.S. combat troops leave South Vietnam as Hanoi frees the remaining American prisoners of war held in North Vietnam. America’s direct eight-year intervention in the Vietnam War was at an end. In Saigon, some 7,000 U.S. Department of Defense civilian employees remained behind to aid South Vietnam in conducting what looked to be a fierce and ongoing war with communist North Vietnam

You can also read my Counterterrorism magazine piece on the Vietnam War via the below link:

And you can watch a short video on the Vietnam War via the below link:

https://www.prageru.com/courses/history/truth-about-vietnam-war#.VE9Cbpco6M8
Posted by Paul Davis at 10:24 AM