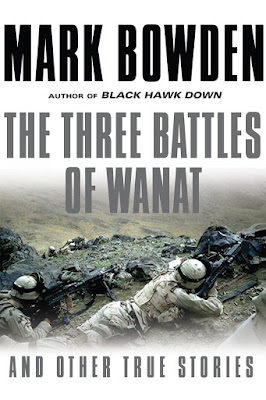 My review of Mark Bowden's The Three Battles of Wanat And Other True Stories appeared today in the Philadelphia Inquirer.

As I wrote at the top of my review, I saw Mark Bowden at a Center City book store some years ago when he was promoting one of his books.

I recall that he spoke of his pleasant surprise that military people and their families were willing to open up to him. He noted that he didn’t serve in the military and previous to his Philadelphia Inquirer series on Black Hawk Down and his subsequent book, he had never covered the military.

As a Navy veteran, a former Defense Department civilian employee, and a writer who covers the military for The Journal of Counterterrorism & Homeland Security Int’l, I’ve associated with sailors, soldiers, marines and airmen nearly all of my life. For some years now I spoken to a good number of current and former armed forces members who very much like Bowden’s Black Hawk Down, Killing Pablo, Guests of the Ayatollah, and his other books on the military.

Although Bowden may not share their mostly hawkish views, most believe he is a fair reporter. Military people want their story told and fairness is all most of them ask for. That Bowden is also a fine storyteller is a plus.

You can read the review via the below link: 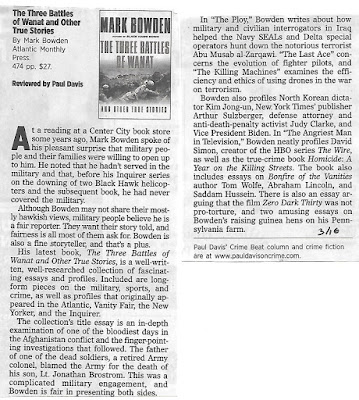 Note: You can click on the above to enlarge.
Posted by Paul Davis at 1:10 PM