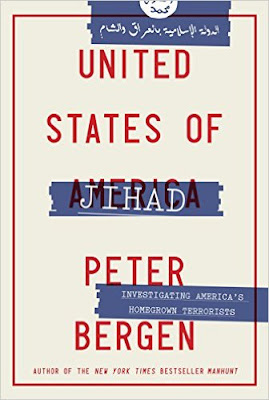 
Peter Bergen's “United States of Jihad: Investigating America’s Homegrown Terrorists” is a gripping account of the motivations and activities of a tiny proportion of Muslim Americans (including converts to Islam) who have become jihadist terrorists since Sept. 11, 2001 on behalf of global terrorist groups such as al Qaeda and ISIS, and the measures the U.S. government employs to counter their plots and attacks domestically and overseas. Mr. Bergen, a prominent journalist on terrorism issues, is the author of several best-selling books on al Qaeda.
Mr. Bergen’s analysis, overall, is sound and revealing, especially when he discloses new details about many of these terrorist plots and attacks, and the way law enforcement agencies such as the FBI, the NYPD and others have attempted to counter them. At the same time, however, his argument that the threat posed by American jihadists (or by foreign jihadists against America) is often hyped and “overestimated” by politicians and opinion makers could have benefited from a closer look.
Mr. Bergen claims that “since 2001 [up to the end of 2015] 45 Americans have been killed by jihadist terrorists in the United States.” Yet, what he does not mention is that during this period, if certain major plots and operations by such jihadists had not been thwarted by U.S. law enforcement agencies or by the sheer luck that their explosives did not detonate, hundreds of Americans would have lost their lives. These include a failed operation by Najibullah Zazi who attempted to conduct a suicide bombing with two associates of the New York City subway system in September 2009, which had been masterminded by al Qaeda in Pakistan; the attempt by Nigerian Umar Farouk Abdulmutallab to set off an explosive bomb on board a Northwest Flight 253 over Detroit on Christmas Day 2009, which had been masterminded by the Yemeni branch of al Qaeda; and Faisal Shazad’s attempted bombing of Times Square on the evening of May 1, 2010, with his explosive-laden SUV car failing to detonate, in a plot masterminded by the Taliban, an al Qaeda-affiliate in Pakistan.
You can read the rest of the review via the below link:

http://www.washingtontimes.com/news/2016/mar/7/book-review-united-states-of-jihad/
Posted by Paul Davis at 12:34 AM