Philadelphia Police Officer Says Shooter Said Nothing Before Ambushing Him 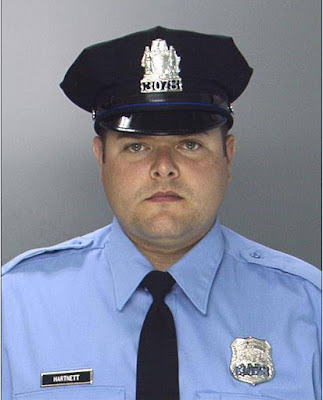 Joseph A. Slobodzian at the Philadelphia Inquirer reports on the testimony of Philadelphia Police Officer Jesse Hartnett (seen in the above photo), who was shot and wounded in an ambush.


Whatever motivated the gunman who seriously wounded Philadelphia Police Officer Jesse Hartnett in a volley of bullets, it remains a mystery to the officer of five years.
"I didn't hear him say anything," the 33-year-old officer, speaking publicly for the first time about his ordeal, told a Philadelphia Judge Thursday at a preliminary hearing for suspect Edward Archer.
Hartnett was shot multiple times while sitting in his parked police cruiser on Jan. 7. and investigators said Archer, 31, of Yeadon, confessed doing it "in the name of Islam."
But at the hearing before Municipal Court Judge Marsha H. Neifield, no additional information about the statement or any alleged religious motivation came out.
After the hour-long hearing, Neifield ordered Archer held on all charges, including attempted murder and aggravated assault, assaulting a law enforcement officer, several gun counts and receiving stolen property - the pistol prosecutors said he obtained from someone who stole it from a city police officer in September 2013.
You can read the rest of the piece via the below link: