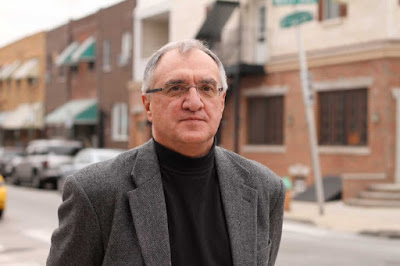 Veteran organized crime reporter and author George Anastasia (seen in the above photo) offers a piece at bigtrial.net on the late Steven D'Aguanno, a dedicated federal prosecutor..

The details are not important.

Born and raised in South Philadelphia, D'Aguanno, 48, fashioned a 21-year career as an attorney by building cases against organized crime figures, first with the Philadelphia District Attorney's Office and then as an Assistant U.S. Attorney.

In many ways, it was personal.

"He was one of the most dedicated anti-Mafia prosecutors I've ever encountered in court," said defense attorney Christopher Warren, who like dozens of others said he was shocked to learn of D'Aguanno's passing. "There was something that motivated him that went beyond the law."

High strung and intense, D'Aguanno seldom discussed his motivation. But in court he took a bulldog approach to trying cases. Broad chested with thick dark hair and piercing dark eyes, the veteran prosecutor brought a laser-like focus to whatever case was at hand.

More often than not, those cases involved members of Cosa Nostra.

"He was an Italian from South Philadelphia," said mobster-turned-government witness Ron Previte who got to know D'Aguanno while testifying for the government in a high profile 2001 racketeering case. "He knew you didn't have to be a mobster to be Italian. Some of those guys think that way."

Whatever demons D'Aguanno was dealing with at the time of his death, he does not deserve the snide and self-serving comments making the rounds today in underworld circles by individuals he prosecuted.

D'Aguanno grew up in the same South Philadelphia neighborhood as those he helped put in jail. They shared the same ethnic background and coming of age experiences, went to the same parish churches, played on the same youth baseball and hockey teams.

He went one way.

They went the other.

And in the end, he saw them for what they were -- gangsters who have taken the positive values of the Italian-American experience, a strong sense of family, fierce and unwavering loyalty and an unshakeable sense of honor -- and bastardized them to justify who they were and what they did.

He never bought into that and it came across as he methodically and doggedly went about his business.