A Surreal Day In America's War Against ISIS 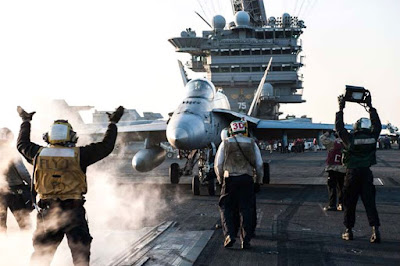 Richard Whittle at the New York Post offers a piece on a surreal day in America's war against ISIS.


One hundred and fifty years ago, in 1866, the town of Waterloo, NY, celebrated the first Memorial Day, remembering the fallen of the Civil War. Fifty years ago, President Lyndon B. Johnson honored Waterloo and reaffirmed the Memorial Day celebration, then centered around the heroes of World War II.
This Memorial Day, we’re fighting a different kind of war — one that would be unrecognizable to our forefathers.
Though it involves thousands of Americans, and a good chunk of our economy, the war against the Islamic State is fought mostly in front of computer screens, in places like Langley, Va., and upstate Syracuse.

It is, in many ways, a surreal conflict, one where some combatants can get a latte after the battle.
For that reason, it can be easy for Americans to forget we’re even fighting a war. Though our airmen and women fly hundreds of missions a day, it’s not uncommon for the conflict to go unmentioned on the news for weeks.
But the stakes are just as high, as ISIS brutalizes the people of Iraq and Syria and preaches global jihad. Also, while the United States mostly conducts airstrikes at a remove, there are still 4,000 US troops in Iraq. Three have lost their lives in this war that we don’t call a war. It’s called Operation Inherent Resolve.
You can read the rest of the piece and view photos and videos via the below link: