Operation Ghost Stories And The Children Of Putin's Spies: The Day We Discovered Our Parents Were Russian Spies 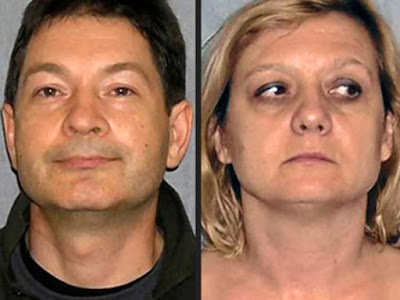 Shaun Walker at the British newspaper the Guardian offers a piece on the children of two Russian spies.

... The two brothers watched, stunned, as their parents were put in handcuffs and driven away in separate black cars. Tim and Alex were left behind with a number of agents, who said they needed to begin a 24-hour forensic search of the home; they had prepared a hotel room for the brothers. One of the men told them their parents had been arrested on suspicion of being “unlawful agents of a foreign government”.

Alex presumed there had been some mistake – the wrong house, or a mix-up over his father’s consultancy work. Donald travelled frequently for his job; perhaps this had been confused with espionage. At worst, perhaps he had been tricked by an international client. Even when the brothers heard on the radio a few days later that 10 Russian spies had been rounded up across the US, in an FBI operation dubbed Ghost Stories, they remained sure there had been a terrible mistake.
Advertisement
But the FBI had not made a mistake, and the truth was so outlandish, it defied comprehension. Not only were their parents indeed Russian spies, they were Russians. The man and woman the boys knew as Mom and Dad really were their parents, but their names were not Donald Heathfield and Tracey Foley. Those were Canadians who had died long ago, as children; their identities had been stolen and adopted by the boys’ parents.
Their real names were Andrei Bezrukov and Elena Vavilova (seen in the above photos). They were both born in the Soviet Union, had undergone training in the KGB and been dispatched abroad as part of a Soviet programme of deep-cover secret agents, known in Russia as the “illegals”. After a slow-burning career building up an ordinary North American background, the pair were now active agents for the SVR, the foreign spy agency of modern Russia and a successor to the KGB. They, along with eight other agents, had been betrayed by a Russian spy who had defected to the Americans.
... If Tim and Alex’s story sounds eerily familiar to fans of The Americans, the television drama about a KGB couple living in the US with their two children, that’s because it’s partly based on them. The show is set in the 1980s, providing a cold war backdrop, but the 2010 spy round-up served as an inspiration. The show’s creator, Joe Weisberg, trained to be a CIA case officer in the early 1990s and, when I speak to him on the phone, tells me he always wanted to put family at the heart of the plot. “One of the interesting things I saw when I worked at the CIA was people lying to their children. If you have young children, you can’t tell them you work for the CIA. And then, at some point, you have to pick an age and a time, and they find out that they’ve been lied to for most of their lives. It’s a difficult moment.”
You can read the rest of the piece via the below link:

You can also read about the FBI' "Operation Ghost Stories" via the below link: