President Obama Is Visiting Hiroshima. Why Not Pearl Harbor? 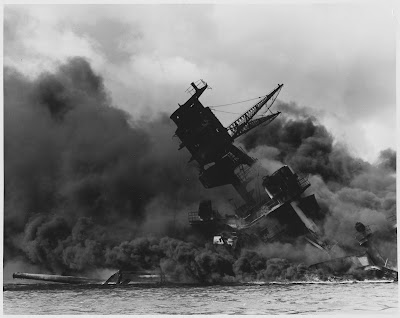 Victor Davis Hanson offers a piece at National Review Online that asks why the president is visiting Hiroshima and not Pearl Harbor.

This year marks the 75th anniversary of the December 7, 1941, Japanese surprise attack on Pearl Harbor that killed more than 2,400 Americans.

President Obama is visiting Hiroshima this week, the site of the August 6, 1945, dropping of the atomic bomb that helped end World War II in the Pacific Theater. But strangely, he has so far announced no plans to visit Pearl Harbor on the anniversary of the attack. The president, who spent much of his childhood in Hawaii, should do so — given that many Americans have forgotten why the Japanese attacked the United States and why they falsely assumed that they could defeat the world’s largest economic power.

Imperial Japan was not, as often claimed, forced into a corner by a U.S. oil embargo, which came only after years of horrific Japanese atrocities in China and Southeast Asia. Instead, an opportunistic and aggressive fascist Japan gambled that the geostrategy of late 1941 had made America uniquely vulnerable to a surprise attack.
... The road to Hiroshima and the massive loss of life in the Pacific was paved by unprovoked Japanese aggression at Pearl Harbor. Americans and their president should remember the lessons of that surprise attack 75 years ago this year.
You can read the rest of the piece via the below link:

You can also read an earlier post on Obama's visit to Hiroshima via the below link:

Note: The above photo is of the USS Arizona during the Japanese attack on Pearl Harbor.
Posted by Paul Davis at 2:40 PM