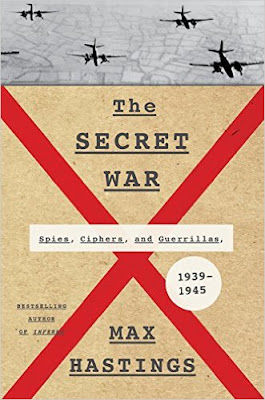 
Writing in the New York Review of Books in March, British historian Max Hastings noted (with an author’s undisguised pleasure) that “seventy years after the conclusion of World War II, works about the conflict enjoy a popularity second only to cookbooks.”
Such is due in large part to writers such as Sir Max, whose hard-eyed objectivity about war is a far cry from the “feel good” books from Stephen Ambrose and others. Mr. Hastings‘ 2011 work “Inferno” dealt with the brutality of war, and it is easily the best one-volume history of the war.
Now I must award Mr. Hastings another “best.” In a quarter-century of reviewing books on intelligence in these pages and elsewhere, “The Secret War” ranks foremost.
His massive overview is a fascinating look at the dark world of espionage and dirty tricks that are a part of warfare, with terse and readable looks at spies, communications intercepts and guerrillas. He postulates some rules that should be heeded by modern masters of the dark arts: report what you find, not what you expect that superiors would like to hear. Further, in the end, intelligence is a sideshow to war — essential, to be sure, but in the end, battles are won by “great armies, fleets, air forces.” In other words, by brave persons who face the enemy directly.
Further, expect political leaders to view intelligence with suspicion. As Joseph Stalin put it, “A spy should be like the devil: no one can trust him, not even himself.”
You can read the rest of the review via the below link: