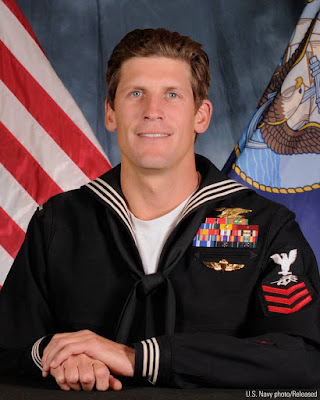 Terri Moon Cronk at the DoD News offers the below report:

WASHINGTON, May 4, 2016 — The Navy SEAL killed in a battle yesterday with Islamic State of Iraq and the Levant fighters responded to an early attack on peshmerga units about 2 miles behind the forward line of troops, Army Col. Steven Warren, spokesman for Operation Inherent Resolve, said today.

In a teleconference briefing with Pentagon reporters from Baghdad, Warren said Keating responded to the ISIL attack on the peshmerga forces as part of a U.S. quick-reaction force in the village of Tal Asquf at about 7:30 a.m.

“ISIL forces breached the peshmerga forward lines,” he said. “At [7:50 a.m.], the Americans there became involved in the ensuing firefight and called in a quick-reaction force,” he said.

“It is a group of very well-armed, very well-equipped, very well-trained American service members whose mission is to stand by, stand at the ready, when American forces are operating,” he said.
Keating was struck by direct fire shortly after 9:30 a.m., and though he was evacuated within what Warren called the “all-important golden hour” between being wounded and receiving medical treatment, his wound was not survivable.

“Our deepest heartfelt condolences go out to that American service member and his family,” Warren said. “He is an American hero. This is a reminder of the risk our men and women face every day supporting the fight against ISIL.”

“We think there were at least 125 enemy fighters involved in this fairly complicated, complex attack. So it was a big fight -- one of the largest we've seen recently,” the colonel said.

With several peshmerga outposts in the area, the force rapidly generated its series of counterattack forces, which numbered in the hundreds for the counterattack and regained control of Tal Asquf, Warren added.

No other coalition or American forces were injured, he said, but he added that both medical evacuation helicopters were damaged by small-arms fire. The peshmerga casualty numbers are not yet known, Warren said.

Operation Inherent Resolve officials believe the attack is likely linked to a string of recent ISIL defeats and ongoing pressure, Warren said, adding that such a pattern has been observed.
“When they are back on their heels, they often will try a high-profile, high-visibility attack to gain some attention,” he told reporters.

ISIL moves into battle with vehicles the coalition calls “technicals,” Warren said, an all-encompassing term for homemade gun trucks. “They throw together these … ‘Jed Clampett’ [vehicles], bolt a machine gun onto the hood of a pickup truck, Gremlin or whatever they can find with four wheels and an engine,” he said.


ISIL troop-carrying vehicles have no standardization, he said. “This is a nonstandard military force that we're facing,” he said, “so it's a little bit of everything, … [and] we've destroyed 20 of them.”
Posted by Paul Davis at 7:16 PM