The War On Cops: How The New Attack On Law And Order Makes Everyone Less Safe 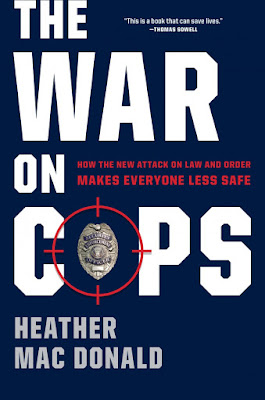 Jeffrey G. Gahler offers a review of Heather Mac Donald's The War on Cops: How The New Attack on Law and Order Makes Everyone Less Safe for the Washington Times.


In “The War on Cops,” Heather Mac Donald provides overwhelming and compelling data to discount the misguided, misplaced and too often malice-based attacks on the law enforcement profession taking place in our country every day. The proven and effective tactic of focusing police efforts on analytically identified high crime areas has improved the quality of life for countless honest, law-abiding citizens living in challenged neighborhoods throughout this country. More importantly, proactive and targeted enforcement have saved countless lives, many of whom are from urban areas and minority communities.
These same communities have seen the positive impact that purposed policing can offer. They have also seen the damage from false messaging and rhetoric. The assault on law enforcement has brought with it a reduced quality of life for those who desperately deserve a chance, and increased crime and unacceptable homicide rates to these same communities. The degradation of these communities is a direct byproduct of the war on cops. De-policing — a phenomenon of police not engaging or refusing to take proactive enforcement actions based on crime patterns and data — has led to a dramatic increase in violent crime and lives lost all over this country. You need to look no further than Baltimore or Chicago to see the impact of de-policing, which is well documented within these pages.
The attacks on law enforcement, attacks based on false information or outright lies crafted to discredit an entire profession, are undeserved. As outlined in the data provided by Ms. Mac Donald, the police profession is the one aspect of government that has had a meaningful impact in many of the communities in need. Over the past several decades, program upon program, dollar upon dollar, have been “invested” in struggling communities trying to make them better. While most have failed, it is our police who have not. It is our police who have held the line for the people the programs have failed.
You can read the rest of the piece via the below link:
http://www.washingtontimes.com/news/2016/may/25/book-review-the-war-on-cops-how-the-new-attack-on-/
Posted by Paul Davis at 2:37 AM