The Less You Know, The Better You Sleep: Russia's Road To Terror And Dictatorship Under Yeltsin And Putin 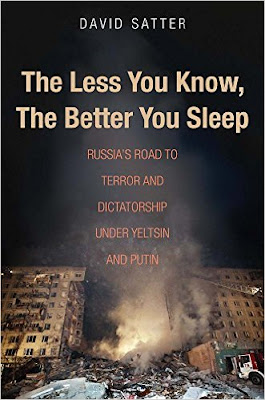 Veteran journalist and author Joseph C. Goulden offers a good review in the Washington Times of David Satter's The Less You Know, The Better You Sleep: Russia's Road To Terror and Dictatorship Under Yeltsin and Putin.


A few pages into David Satter’s truly terrifying book, one realizes that his title is smack-on accurate: modern Russia is a frightening member of the world community to an extent of which most persons are blissfully unaware.
As Mr. Satter writes, “To grasp the reality of Russia, it is necessary to accept that Russian leaders really are capable of blowing up hundreds of their own people in order to preserve their hold on power. When one accepts that the impossible is actually possible, the degradation of the Yeltsin years and Vladimir Putin’s rise to power make perfect sense.”
At hand is a detailed and well-sourced account of two decades of criminal rule that is ill-concealed beneath what Mr. Satter calls a “mask of liberalism” worn by post-Communist leaders. He writes from his viewpoint of a journalist who has covered Russia since 1976, beginning with the Financial Times and Wall Street Journal. Unsurprisingly, Moscow bureaucrats expelled him in 2013.
No matter. Mr. Satter left with enough solid reportage to write what is essentially an indictment of modern Russia. For instance, he describes a government that blows up apartment buildings, killing hundreds of its own citizens, and foists the blame on rebels from break-away Chechen — a murderous lot to be sure, but convenient scapegoats for a regime that wants to stir support for war.
Or consider the denationalization of state-owned industries that are turned over to cronies of the ruling cliques — “the largest peaceful transfer of property in history without the benefit of law.” Under the guise of “reform,” the new crowd “created the conditions for the criminalization of the entire country.”
You can read the rest of the review via the below link:

http://www.washingtontimes.com/news/2016/may/8/book-review-the-less-you-know-the-better-you-sleep/
Posted by Paul Davis at 10:29 AM

Labels: book review, David Satter, Joseph C. Goulden, The Less You Know The Better You Sleep Russia's Road To Terror and Dictatorship Under Yeltsin and Putin, The Washington Times