The Fall Of Moscow Station 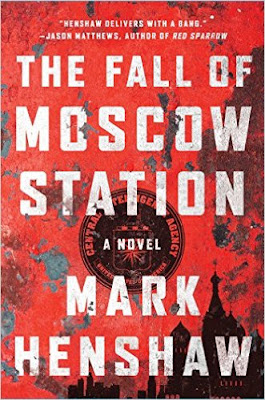 Veteran journalist and author Joseph C. Goulden offers a good review in the Washington Times of Mark Henshaw's The Fall of Moscow Station.


Although a primary purpose of a counterintelligence unit is the apprehension of enemy spies, an equally important function requires a bit more sophistication: throwing handfuls of destructive sand into the gear boxes of a rival espionage agency.
Such is the climax of a sparkling spy thriller by CIA veteran Mark Henshaw, whose insider point of view adds authenticity to a yarn that, to me, evoked memories of the late Tom Clancy.
Mr. Henshaw's book is the third in a series featuring CIA officer Kyra Stryker and her analyst colleague, Jonathan Burke, who work in a CIA unit called “the Red Cell.” According to Mr. Henshaw, George Tenet as director of central intelligence created Red Cell in September 2001 as a “devil’s advocate unit to tell me what no one else is telling me.” Mr. Henshaw’s 16 years at the agency included a stint in the unit. (A press release even gives the office’s location, Room 2G31, Old Headquarters Building.)
The story builds (roughly) on two real-life events in recent intelligence history. One was the defection to the Soviets of CIA officer Edward Lee Howard in September 1985, after he had been trained in highly secret “Moscow Rules” — the tradecraft used by the CIA station in Moscow.
You can read the rest of the review via the below link:

Note: My interview with Mark Henshaw will appear in the upcoming issue of Counterterrorism magazine. I'll post the interview here when the magazine comes out.

You can read my Washington Times review of Red Cell, Mark Henshaw's first spy novel in the series, via the below link:

http://www.pauldavisoncrime.com/2012/07/new-tom-clancy-review-of-mark-henshaws.html
Posted by Paul Davis at 1:19 AM