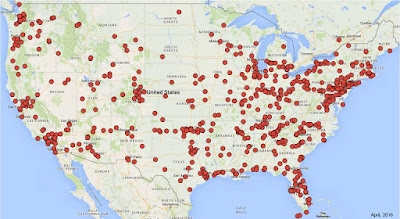 The FBI released a report on the Highway Serial Killings Initiative.


If there is such a thing as an ideal profession for a serial killer, it may well be as a long-haul truck driver.
FBI Crime Analyst Christie Palazzolo is quick to point out that long-haul trucking is an honorable profession and that the overwhelming majority of drivers are not murderers—but it does happen, and the pattern is unmistakable.
More than a decade ago, analysts for the FBI’s Violent Criminal Apprehension Program (ViCAP)—the only national database of serial crimes—began to see a marked increase in the number of bodies recovered along the side of the road. A majority of the victims were truck-stop prostitutes, and it turned out that many of the suspects were long-haul truckers. “We had an inordinate number of victims and offenders from this rather specific population pool,” Palazzolo explained.
To make matters worse, these cases are extremely difficult to investigate. A long-haul driver can pick up a prostitute at a truck stop in Georgia, rape and murder her, and dump her body on the side of the road in Florida later that day. The victim has no connection to the area where she was found, and there may be no forensic evidence to collect because the crime was committed hundreds of miles away. The local police detectives investigating the case might have little experience dealing with a crime of this nature and may be faced with few, if any, leads.
You can read the rest of the piece and watch a video clip via the below link: