Trump Owes John McCain And All POWs A Humble Apology 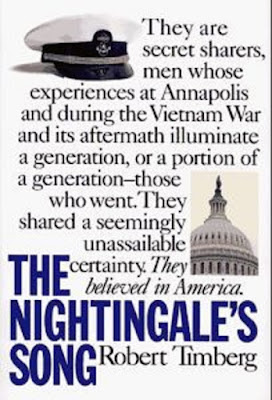 I rarely agree with Richard Cohen, a liberal Washington Post columnist, but I agree with him concerning Donald Trump's thoughtless and outrageous comments about John McCain and other prisoners of war.

I also agree with Cohen that Trump (and everyone) ought to read Robert Timberg's The Nightingale's Song (although I somehow doubt that Trump reads anything that is not about himself).

As Cohen notes in his column, the book covers McCain's captivity in North Vietnam. The book also covers three other naval academy graduates who went on to serve in Vietnam; Oliver North, James Webb and Robert McFarland.


“I think it’s important for Donald Trump to express his appreciation for veterans — not John McCain, but veterans who were incarcerated as prisoners of war,” John McCain said over the weekend. “When he said, ‘I don’t like people who were captured,’ then there’s a body of American heroes that I’d like to see him retract that statement — not about me, but about the others.”
McCain, while thoroughly admirable, has it wrong. What Trump said was about him — explicitly about him and only inferentially about other POWs captured during the Vietnam War. Trump was purposely denigrating the heroism of McCain, a POW for more than five years, in solitary for two years, tortured all the time, deprived of food and medicine, untreated for the injuries he received when he had to bail out of his A-4 Skyhawk over Hanoi and was beaten and bayoneted on the ground. And then, when it was discovered that his father, Adm. John S. McCain Jr., had been named commander of all U.S. forces in the Vietnam theater, McCain was offered an early release from prison. This would have provided the North Vietnamese with a propaganda coup, but it also would have violated Navy regulation — first in, first out. McCain turned it down. The torture resumed.
That same year, 1968, the 22-year-old Donald Trump moved straight into his father’s business. His military experience was limited to attendance at the New York Military Academy, in suburban New York, where he had been sent for being a brat. He undoubtedly got all sort of medals for making his bed and brushing his teeth and learned, as we all do, much about courage and perseverance from his experience.
Still, Trump ought to read “The Nightingale’s Song” for a full account of McCain’s naval life. The book, written by Robert Timberg, was a classic in its time (1995), but it is hardly dated. It might, in fact, shame Trump into realizing that McCain did what he could never have — probably. (After all, we never know.)
You can read the rest of the column via the below link: