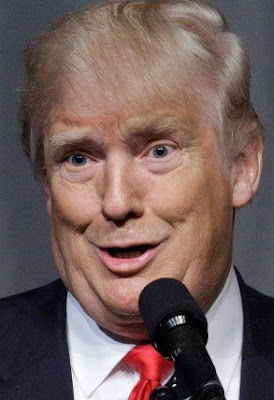 Jennifer Rubin, a conservative columnist at the Washington Post, offers her take on Donald Trump's positions - past, present and future.


The Trumpkins put their faith in a charlatan, and now they are discovering that, well, he’s a charlatan. In the last 48 hours or so we learn:
He might just raise taxes, after all. The supply-siders who swooned over his $10T-debt-creating tax plan and didn’t bother with his trade and entitlement policies (straight liberal) may have been snookered. (Oh, and he’s flip-flopped on raising the minimum wage.)
Like an owner of a cheesy casino haggling with the banks, he thinks he can negotiate down the sovereign debt of the United States. No, really. (Question: If we aren’t going to pay off all our debt do we have enough pennies in the couch to keep NATO running?)
The populists who believed he was going to self-fund and avoid corrupting influences? Not only is that not happening but his finance director is mainly a Democratic money man. And he worked for Goldman Sachs. And he skipped out just before a bankruptcy sunk a film company in which he invested clients’ money. (“With Relativity’s Chapter 11 bankruptcy filing last week, those high hopes have been dashed, and Mnuchin has been left in a particularly uncomfortable position. The money-man and fellow investors in a Dune Capital fund are said to have lost as much as $80 million — equity that is almost certain to be lost for good, said two sources familiar with the situation. And disgruntled Relativity investors privately are questioning how a bank Mnuchin once headed –OneWest Bank of Pasadena – was allowed by Relativity to drain $50 million from the studio just weeks prior to the July 30 insolvency filing.”) Birds of a feather, I guess. Well, joke’s on the populists I suppose.
You can read the rest of the column via the below link:
https://www.washingtonpost.com/blogs/right-turn/wp/2016/05/05/treacherous-territory-navigating-the-trump-terrain/?wpmm=1&wpisrc=nl_popns
Posted by Paul Davis at 3:47 PM