DoD Secretery: 600 Troops to Deploy to Enable Iraqis to Retake Mosul From ISIL 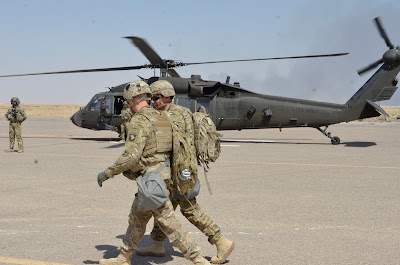 WASHINGTON, Sept. 28, 2016 — About 600 American troops will be deployed to Iraq to further enable local security forces as they prepare to retake the key Iraqi city of Mosul from the Islamic State of Iraq and the Levant, Defense Secretary Ash Carter said today.
In a statement, the secretary said in anticipation of the Mosul fight, the U.S. and Iraqi governments have agreed that additional U.S. and coalition capabilities could help accelerate the campaign at this critical phase.

Carter said he and Marine Corps Gen. Joe Dunford, chairman of the Joint Chiefs of Staff, recommended deployment of the additional troops to President Barack Obama to further enable Iraqi forces, and that the president authorized it with the support and approval of Iraqi Prime Minister Haider al-Abadi.

Gearing Up for Mosul Offensive
The U.S. troops will work in close coordination with the Iraqi government to provide specific capabilities, such as logistics and maintenance support, and train, advise and assist teams for Iraqi security forces and Kurdish peshmerga for the upcoming Mosul operation. Expanded intelligence resources will be used to disrupt ISIL's terrorist network in Iraq and beyond, Carter said.
“The coalition to defeat ISIL continues to achieve results on the battlefield, and I congratulate Iraqi security forces on their recent progress, including the operation to free Sharqat,” he said. “The coalition will continue to increase the pressure on ISIL in Mosul and wherever it seeks refuge in Iraq.”
Increasing Pressure on ISIL

The addition of more than 600 additional troops in the coming weeks will bring the force management level to 5,262 U.S. troops as of today, said Navy Capt. Jeff Davis, director of Pentagon press operations.

“We are continuing to increase pressure on ISIL in Mosul in particular and in anticipation of that coming fight … as we close in on Mosul,” Davis said.

While most specific locations cannot be released for security reasons, Davis said, he identified two air bases where the American troops will be sent with specific missions: Al-Asad Air Base in the Euphrates River Valley north of Baghdad, and Qayyarah Air Base near Qayyarah City.

At Al-Asad Air Base, American troops will provide logistics and maintenance, and help with airfield operations to bring the base to a level that can support a greater pace of operations as the Mosul effort progresses.

Military logisticians will work at Qayyarah Air Base similarly to help the base function as the significant throughput point for the Iraqi forces as they move farther north, he said.
“Mosul is very isolated from the major population centers in Iraq, and to have a throughput point in Qayyarah will allow for greater enabling of our operations there,” Davis said.

The press operations director clarified that the additional train, advise and assist teams and additional intelligence support come under existing authorities. “Nothing is changing in regard to the role of our mission, with the role of what our authorities are to do there,” he noted. “This does not mean any greater role for [U.S.] service members in terms of what their mission is.”

Davis added that the fight remains Iraq’s, and “everything we do there is to support and enable them. They will continue to be the primary trigger-pullers.”

Two things going on: the retaking of Mosul, and helping to ensure a lasting victory for the Iraqis, Davis said.

“From our perspective, this [force management level] increase has been long anticipated [and] long planned,” he added. “We’ve known there would need to be another additive of capabilities prior to the final push [to Mosul].”

The roughly 600 additional U.S. forces are the number of forces expected to enable Iraq to take on its next major objective of Mosul, Davis said. “There are no major objectives after that,” said he added. “This is it. This is the last big holdout in Iraq for ISIL.”