My Washington Times Review Of 'Chin: The Life And Crimes of Mafia Boss Vincent Gigante' 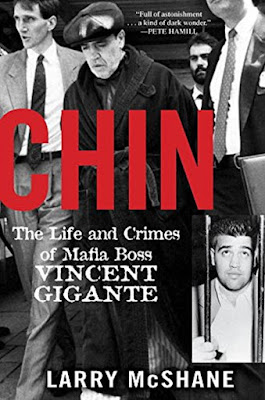 My review of Larry McShane's Chin: The Life and Crime of Mafia Boss Vincent Gigante appeared today in the Washington Times.


In the history of America’s criminal organization Cosa Nostra, popularly known as the Mafia, Vincent “the Chin” Gigante stands out not only as one of the most powerful and successful bosses, he also stands out as one of the most peculiar.
The New York tabloids covering the Cosa Nostra “goodfella” criminals called Vincent Gigante “the Oddfella” due to his habit of walking the streets of Greenwich Village in New York City in pajamas, slippers, a ratty robe and an old cap. Helped along by an escort, he would mutter incoherently to himself.
Larry McShane, a reporter with the New York Daily News, offers an interesting look at this unusual gangster in “Chin: The Life and Crimes of Mafia Boss Vincent Gigante.” The book details how Gigante rose from a professional boxer to be a driver, bodyguard and hit man for crime boss Vito Genovese, and eventually became the Genovese crime family boss himself. The book also explains how his public “crazy act” kept him out of prison.
... By 1985, when Gigante was surreptitiously running the Genovese family, and Anthony “Fat Tony” Salerno took the law enforcement heat as its straw boss, the family’s assorted illegal enterprises included gambling, extortion, loan-sharking, and bid-rigging,” Mr. McShane writes. “The Genovese influence extended to the garbage, concrete, construction, and music industries; they held an iron grip on the labor that allowed them to dominate the New Jersey waterfront, the Javits Convention Center and the Fulton Fish Market.”
The Chin ruled more than 400 mobsters and his influence extended to Philadelphia, Miami and other areas far from New York.
You can read the rest of the review via the below link:
http://www.washingtontimes.com/news/2016/sep/12/book-review-the-life-and-crimes-of-mafia-boss-vinc/
Posted by Paul Davis at 10:36 PM