Navy Photographer Looks Back on 9/11 Memories 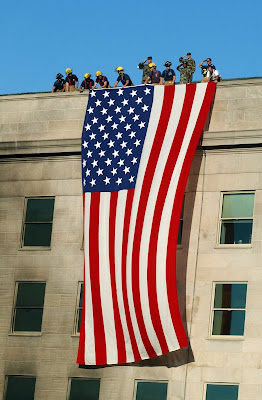 WASHINGTON, Sept. 8, 2016 — In the immediate aftermath of 9/11, one 30-year-old combat camera sailor took a photograph that leapt out of news coverage to deliver a needed jolt of hope: A huge American flag draped down the side of the damaged Pentagon.
That sailor, Michael Pendergrass, is now 45 and retired from the Navy, but he recently revisited the Pentagon to discuss his experiences there with DoD News.

From Pancakes to Disaster

The day of the terrorist attacks that struck the Pentagon, the World Trade Center and a field in Shanksville, Pennsylvania, Pendergrass was at a command-sponsored pancake breakfast with his combat camera unit in Norfolk, Virginia.

“I was eating some pancakes with a couple buddies of mine when somebody mentioned that, ‘Hey, turn on the news, something happened in New York,’” Pendergrass said. “And we turned on the news and they were talking about a plane had struck the twin towers.”

Those present gathered around the television to watch, and when the second plane hit, Pendergrass said, “I remember looking at my friend and saying, ‘That’s terrorism.’ I said, ‘That’s not an accident.’”

A little over a half hour after the second strike on the World Trade Center, a third plane struck the Pentagon.

Following the strikes, Pendergrass was part of a seven-person team of photographers and videographers who headed to the Pentagon.

“It was a little bit of chaos when we got there,” he said.

Pendergrass said a key lesson in both the military and combat camera is to adapt to situations. 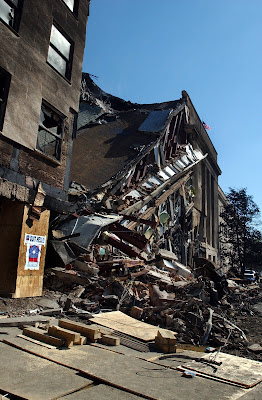 “It’s ever-changing, so you know that the core thing you’re down there to do is to assist, in any way possible -- to document what’s going on, because your images might help in either the investigation [or] it might help answer questions to the public of what just happened,” he said. “So I shot reactions of people, I shot people that were assisting on the ground, I shot damage.”

When he got to the Pentagon, he said, “They were still trying to figure out what was going on, [the building] was still on fire. We just documented what we saw that first day, came back with the imagery and made a game plan for the next day.”

One day didn’t go according to plan. When President George W. Bush toured the Pentagon and delivered remarks, Pendergrass found himself at the wrong place.

“I had heard what area his motorcade was supposed to come in on, and set myself up to be in position for when he came in,” Pendergrass said. “At the last minute I received word that his motorcade had changed and come in the opposite side of the compound, so I was in completely the wrong position.”

Security locked down the compound once Bush arrived, Pendergrass said, so he couldn’t make his way to where the president was speaking.

“He came in, he started speaking, and I’m standing there with my camera thinking, ‘They’re going to kill me.’”

It was then he noticed some commotion at the top of the building, Pendergrass said.

“So I picked up my camera and I shot a picture, and then I changed lenses and got in closer on it, and it was a flag. It was a huge flag,” he said. “It was going across the top and I kind of shot the progression, and then they came out to the front and then music played across the whole compound and they dropped down the flag and I shot as it was unfurling.”

Pendergrass returned to work and brought his imagery in later that day. He said his boss, Christopher Madden, took one look at the final flag photo and told him, “Get a caption on that, right now.”

The photo shows the flag just reaching its full length down the scorched side of the Pentagon. Lined up on the building’s roof, a group of firefighters and a sprinkling of people in uniforms stand above the flag, saluting.

Days went by after the photo’s release, and it kept appearing in 9/11 coverage. Pendergrass said a naval historian told him he had “captured a moment of how a nation was feeling. That we were hurting, and we were looking for something to rally us, let us know there was hope. And that photo did it.”

As he continued work at the Pentagon in the days and weeks after 9/11, Pendergrass said he felt that “the whole nation rallied together and was determined to bounce back from this, that this wasn’t going to beat us, and it unified us.”

Meanwhile his flag photo kept showing up -- and still shows up in some surprising places, he said.

“I’ve seen it in a lot of different places,” Pendergrass said. “Every once in a while it will pop up in a new place. … I saw it in the Pentagon, I saw it on websites. … Just a few months ago I saw it at the Marine Corps museum at Quantico. I was going through with my wife and it was right there at the end.”

“I’m just proud to know that I left a little mark that will live longer than my time here,” he said. “I would hope that every photographer gets the chance to shoot a shot like that -- not that situation, but to have taken and captured a moment that will go longer than their time.”

Pendergrass said as a proud American, he is happy to have “done something that helped us heal from such a horrible situation. In all the pain and suffering that was going on in the nation, there was this shot that kind of helped us bounce back.”

When he took the 9/11 photo he was a petty officer first class, Pendergrass (seen in the below photo) said, and he retired from the Navy as a chief petty officer in 2010. He now works for the Justice Department. 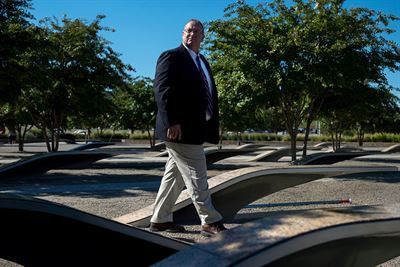 “[The memorial is] an amazing tribute to the tragedy that happened here,” he said. “A lot of thought and respect went into designing it. It’s very, very different from what it looked like when I got here [on 9/11.]”

Pendergrass said his experience at the Pentagon led him to do more forensic photography.

“Not everybody can function in that [crisis environment] and it’s something that I’ve found that I could do,” he said. “And it’s necessary to have people like that, I think, to document and try to capture the scenes, to try to make sense of the madness.”
Posted by Paul Davis at 1:07 PM