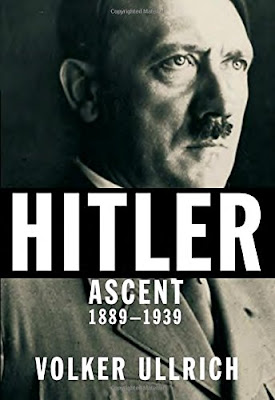 
Even at decades removed, historians remain fascinated with the why — and how — of Adolf Hitler’s rise to evil power, and the role of the German people in his horrendous assault on mankind. Many splendid works already exist, beginning with Alan Bullock’s 1952 masterpiece, and more recently, a two-volume work by Ian Kershaw in 1998 and 2000 (all of which I have read).
Now comes the German scholar/journalist Volmer Ullrich, with the first of two planned volumes, which offers keen insight into how Hitler perfected demography to sway audiences into hysteria. And Mr. Ullrich displays an insight into the making of Hitler that I did not find elsewhere.
When Hitler first dabbled in politics, he was a nobody, a slightly wounded war veteran who had served a jail term for trying to overthrow the government. He eked out a living selling postcards he painted in Munich. One person who saw him in those years later recollected, “When I first met him, he was like a tired stray dog looking for a master.”
But Hitler sensed that war-wrecked Germany ached for a “savior” who would restore to glory a nation defeated because of “Jews, communists and other traitors.” A passage in “Mein Kampf,” which he wrote in prison, revealed both his planned approach and the low mental esteem in which he held fellow citizens: “The receptivity of large masses is very limited. Their capacity to understand things is slight whereas their forgetfulness is great. Given this, effective propaganda must restrict itself to a handful of points, which it repeats as slogans as long as it takes for the dumbest member of the audience to get an idea of what they mean.”
Although his podium voice was shrill and unremarkable, Hitler displayed an ability to exploit the anger of a populace who felt they had been betrayed by their own leaders in war, and suffered from an unjust peace imposed at Versailles by the victors.
You can read the rest of the review via the below link: