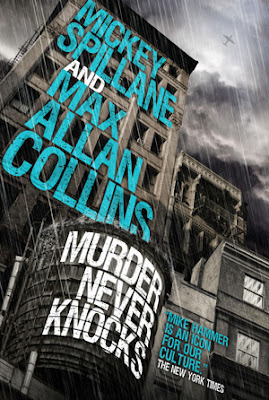 
Murder is a comfortable topic in the bare knuckle world of Mike Hammer who punched his way through decades of thrillers. He is the legendary tough guy who sprang from the pen of Mickey Spillane and he has been brought to roaring life in a posthumous “last thriller.”
Max Allan Collins was an ideal choice to continue the bloody doings of Hammer. Murder begins the book with a hired killer who underestimates the private investigator and predictably winds up dead. Hammer has the kind of brutal skills that can put down three bad guys at once and tell wisecracks about it. It sounds dated but it isn’t. It is happily devoid of morality and it is doubtful anyone in it ever heard of political correctness. Which makes it a good old-fashioned read. Mr. Spillane picked the right man to move in on the pile of still-unpublished manuscripts that he bequeathed to Mr. Collins. What is interesting is that he also bequeathed a writing style that dates back through the 1950s and has an atmosphere of the film noir with men in trench coats and women who sound as if Damon Runyon would fit them into the cast of “Guys and Dolls.”
Nevertheless it is hard-bitten but solid. Hammer is always a little broke, and admits happily that he never turns down a thousand or three to keep him in his relatively modest lifestyle including the cigarettes he is trying to give up. He is still solidly enamored of Velda, his gun-packing secretary who is always where he needs her when he wants her, including in bed. And they have the kind of sophisticated relationship that didn’t become fashionable for about another 20 years when open marriage hit the happy couples. In this hard-bitten case, Hammer bounces into his next assignment to protect a Hollywood producer throwing a party for the Broadway star who is his current fiancee. Of course somebody gets killed. Murder comes calling again for one of the victims, a newsstand operator who took a bullet meant for Hammer, seriously annoying the private eye who seems offended by the ones that miss as well as the ones that find their target.
You can read the rest of the review via the below link:

http://www.pauldavisoncrime.com/2015/03/my-crime-beat-column-look-back-at-crime.html
Posted by Paul Davis at 5:48 AM