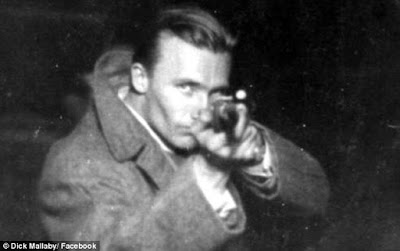 From Ian Fleming's older brother Peter to a good number of World War II secret agents and commandos, identifying the true-life person that Fleming based his iconic fictional character James Bond on has become a cottage industry in journalism and publishing.

Fleming said time and again that he didn't based the Bond character on a single person, but rather Bond was based on a general type of World War II secret agent and commando, many of whom Fleming met while serving as a naval intelligence officer during the war. And Fleming also noted that he gave Bond many of his own personal likes, dislikes and character traits.

But again we have a Daily Mail piece that speculates that Dick Mallaby (seen in the above photo), a WWII SOE commando, was the inspiration for James Bond.

Perhaps his actions and the fact that he wore his clothes under a scuba suit - like Bond in the Goldfinger film - conjures up the Bond image.

While I don't think Dick Mallaby was the sole inspiration for Bond, nor were the others mentioned over the years since Fleming's death in 1964, Mallaby's patriotism, bravery and resourcefulness were indeed the personal attributes that Ian Fleming infused into his James Bond character.

You can read about Dick Mallaby via the below link:

http://www.dailymail.co.uk/news/article-3803649/Real-life-James-Bond-parachuted-enemy-lines-armed-secret-codes-toothpaste-crystals-radios-honoured-Italy.html
Posted by Paul Davis at 5:14 AM