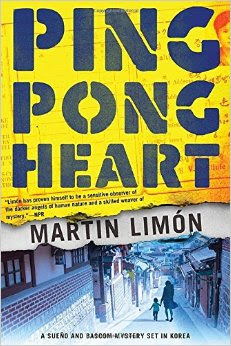 
Robbery, mayhem and murder are spiced by sardonic military humor in this lively thriller set in South Korea in 1974 when the Cold War was a good deal warmer.
Two American Army CID sergeants — George Sueno and Ernie Bascom — cannot be described as the heroes of the plot but they certainly dominate what frequently sounds like a bar room brawl. Ernie for example, doesn’t hesitate to throw a cocktail table at a GI who annoys him. Sueno and Bascom are investigating a petty theft case when an Army major is found murdered. Their previous interest in him was aroused by his complaints that he had been robbed by a “business girl” called Miss Jo, one of the many call girls left in the wake of the Korean War. She has disappeared, which is hardly surprising, but the death of an American officer gets the attention of the CID and plunges Sueno and Bascom into a major investigation involving military intelligence.
Martin Limon clearly knows his territory, especially when the military get into a bar full of glamorous Korean women. The dialogue swings between Korean and American slang, with one young woman telling a GI “You slicky my ping pong heart.” Sueno translates this as her complaint that the man is breaking her heart in the course of what appears to be an argument over the cost of an all-nighter. There is a lot of “slicky” involved in the plot and it becomes more violent as it moves at the pace of a speeding jeep. Sueno reflects that Bascom is the best driver he has ever known but that doesn’t mean you aren’t likely to wind up dead in a car crash. The two sergeants find themselves involved in high level military operations in which U.S. Army counterintelligence is a player and they are low level actors who get blamed for everything that goes wrong. Romance is not noticeably present in the plot unless you count the fact thatSueno is searching for his illegitimate son by a Korean woman who has disappeared into a dangerous zone. He is, he makes clear, more interested in the child than its mother but he does, as he insists, want to do “the right thing” by rescuing the pair from North Koreans, although it seems unlikely he has marriage in mind. Ernie is a full-time player when it comes to the opposite sex, but he has a weakness for the beautiful Miss Kim who is a secretary in his office and uncooperative.
You can read the rest of the review via the below link:

http://www.washingtontimes.com/news/2016/sep/5/book-review-ping-pong-heart-a-sergeants-sueno-and-/
Posted by Paul Davis at 3:24 AM