Tom Wolfe Plays Mischief With Language In 'Kingdom Of Speech' 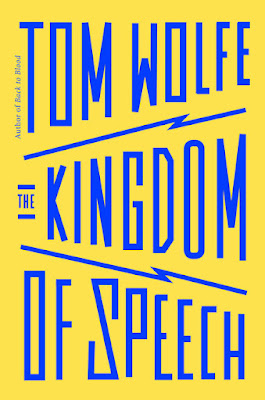 Frank Wilson, my friend and former editor at the Philadelphia Inquirer, offers a good review in the Inquirer of Tom Wolfe's The Kingdom of Speech.

According to a 2004 article in Frontiers of Psychology titled "The Mystery of Language Evolution," "the most fundamental questions about the origins and evolution of our linguistic capacity remain as mysterious as ever."
Among the article's eight authors - as Tom Wolfe notes in his new book, The Kingdom of Speech - was Noam Chomsky, "the biggest name in linguistic history."
Wolfe found the article odd: "I had never heard of a group of experts coming together to announce what abject failures they were." He wondered what it was that "has left endless generations of academics, certified geniuses, utterly baffled when it comes to speech."
... Wolfe's thesis is that speech is not a product of biological evolution, but a human artifact, the artifact of artifacts, the one that has made all the others possible. Devout evolutionists have already denounced Wolfe for heresy - although Wolfe, an atheist, objects to evolution because, he says, it is a cosmogony, a faith-based theory of everything.
The common reader will likely find The Kingdom of Speech an entertaining and informative romp, thanks to Wolfe's patented stylistic hijinks. It may raise more questions than it answers, but that may well be its greatest virtue. It is also, quite often, very funny.
You can read the rest of the review via the below link:

Note: You can read Frank Wilson's popular literary blog, Books, Inq, via the below link:

http://booksinq.blogspot.com
Posted by Paul Davis at 2:46 AM